(Clearwisdom.net) Shen Yun Performing Arts began its five-show run in the Greater Los Angeles area with a sold-out performance at the Segerstrom Center for the Arts, located in Orange County, on January 11, 2012. Following the second show at the venue on January 12, the company will grace the historic Dorothy Chandler Pavilion on January 13-14 for the remaining three shows.

The tickets for the Wednesday opening-night performance at the Segerstrom Center were sold out days in advance, prompting the local presenting organization to open additional seats to accommodate the demand. More than 2,000 audience members welcomed Shen Yun with enthusiastic applause, deeply touched by the beauty of the authentic Chinese culture presented on stage.

Music teacher: "It is phenomenal! You've got to go see it!"

Mr. Gary Hickman, an attorney, had learned about Shen Yun from a presentation at a local Rotary Club, where he is a member. He attended the opening-night performance with his wife, Mrs. Sally Hickman, who is a music teacher.

"It was more than I anticipated. I am impressed with the dancing--the athleticism of the dancing, the color, the interplay of the screen [backdrop] and the individuals...how it all works together," said Mr. Hickman at the intermission.

"It is phenomenal!" added Mrs. Hickman.

With a keen ear for music, Mrs. Hickman was greatly impressed with the Shen Yun Orchestra and the original scores presented in the show. "Using the modern orchestra with ancient instruments is a wonderful combination," she said, referring to Shen Yun's fusion of classical Western and Chinese instruments in the orchestration.

"The composers have done some ingenious work, absolutely incredible work tying it all together. ... The music is wonderful. The composers are phenomenal," she added.

"The combination of the music with dancing--the whole ensemble is so well blended together. The composers--their music is a joy to listen to. It becomes part of the story and does not take away from the story. It is all together. So, I love it, love it," Mrs. Hickman emphasized.

The couple was deeply moved by the stories presented on stage, which depicted ancient legends, as well as modern challenges faced by the people of the nation once known as "The Land of the Divine." The lighthearted dance about youthful monks, titled "Joyful Little Monks," was "very fun" and "charming," noted Mrs. Hickman. The story set at Tiananmen Square that called attention to the decade-long persecution of Falun Dafa, a spiritual meditation practice, in today's China "was very touching and strong," added Mr. Hickman. His wife agreed, calling it "very moving."

Mr. Hickman said he learned a lot about traditional Chinese culture from the show and will recommend Shen Yun to his friends, telling them, "It's more than you [may] expect." 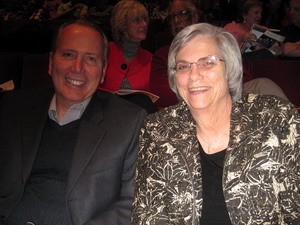 Medical doctor and retired lawyer: "We learned a lot"

Dr. Gregory Bates, a physician, saw the advertisement for the Shen Yun performances in the local newspaper, The Orange County Register, and decided to see the performance with his wife, Mrs. Joann Leatherby, a retired lawyer.

"I like the artistic beauty of dancers. Overall, it is a beautiful performance," said Dr. Bates at the intermission. "The dancing is very athletic and beautiful, done sensitively. And I would encourage people to come to see a different view of China than we are usually exposed to."

Mrs. Leatherby agreed. "It's very beautiful. I love the dancing, and I love the costumes, the pageantry, and the window into China--the view of Chinese history that I did not know," she said, adding that the costumes are "just extraordinary."

"We've learned a lot," concluded Dr. Bates, appreciating the educational value of the program, ranging from the traditional culture to the suppression of spiritual freedom in today's China.

"We know a little bit about [the persecution of Falun Dafa], but probably not as much as in the West we should know about it," he said. "I bet the Chinese government does not like [this] program very much--[Shen Yun is] spreading knowledge in the West that we do not have." 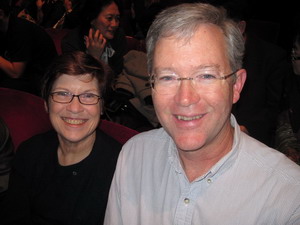 Mr. Gary Wissinger, a computer analyst, decided to see the performance after seeing an advertisement in the Los Angeles Times.

Appreciating the artistic beauty of the performance, he said: "[It was] very colorful, very exciting. The dancing was great!"

"The music was outstanding. The orchestra is really top-notch," added Mr. Wissinger, who used to play trombone. "The traditional [Chinese] instruments combined with the Western orchestra [created a] very nice sound. ... I really enjoyed it," he said.

Mr. Wissinger was especially touched by the spiritual theme of the program, which featured several dances and songs about an ancient meditation practice of Falun Dafa. "I am going to home and look up Dafa on Internet--to find out what it is about," he said, adding that he is "very aware" of the suppression of spiritual and religious belief by the Chinese Communist Party. "It's very difficult," noted Mr. Wissinger. 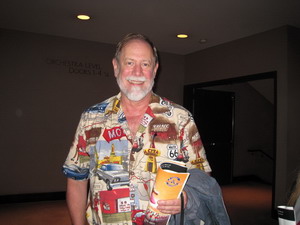