(Clearwisdom.net) On the morning of January 8, 2012, practitioners in the Central District of Taiwan gathered at Chungguang Elementary School in Taichung at the begining of the New Year to study the Fa and share their recent cutlivation experiences. After the sharing, the practitioners sent New Year's greetings to Master Li Hongzhi, the founder of Falun Gong. They respectfully wished revered Master a Happy New Year. 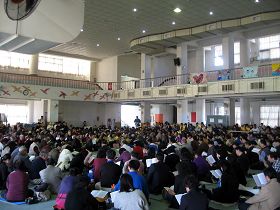 After the sharing, all of the practitioners posed together for a group photo, to respectfully wish compassionate and great Master a Happy New Year.

“An Understanding of Master’s New Article: “Watch Out for Breeding Demons in One’s Own Mind””

“Taiwan: Traditional Art to Cultivate and Purify the Mind (Photos)”