(Clearwisdom.net) Falun Dafa practitioner Mr. Feng Zhongliang, born in March 1963, was a design manager at the Panzhihua Ministry of Construction. After he began practicing Falun Gong, he became healthy, his work was outstanding, and he received three awards for job excellence. 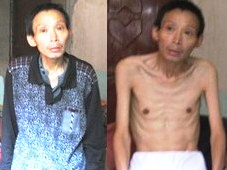 Feng Zhongliang shortly before his death

Mr. Feng was arrested in the summer of 2006 while clarifying the truth about Falun Dafa to a visitor from another bureau and was subsequently sentenced to prison. He was severely persecuted in Wumaping Prison, where he developed tuberculosis. He was released on April 28, 2009, but could no longer walk. He suffered from multiple organ failure and severe shortness of breath. The Panzhihua Ministry of Personnel refused to give him basic living expenses after his release, so he was forced to go to southern China to live with his father, who was in his 80s.

In the summer of 2006, Mr. Shi from the City Forestry Bureau went to visit Mr. Feng. Mr. Feng gave him some truth-clarification materials to help him understand the facts about Falun Gong. Shi reported him to the authorities, and the Yanbian County Police Department handled the case.

A dozen officers took Mr. Feng to the police department and attempted to force him to reveal the source of his materials. His hands were cuffed behind his back and to the leg of a desk, forcing him into a position in which he could only half squat and half stand. Officers pulled him up by his collar, causing excruciating pain to his back and legs. He began to shake, and when he sat down, seven to eight officers took turns beating him. They tortured him throughout the night.

The next day, they forced Mr. Feng to stand at a 45-degree angle with his head against a wall. His legs shook from fatigue, yet he was forced to squat. When officers struck his hands and feet with a stick, he collapsed. He was tortured two days nonstop, and was severely traumatized as result.

After two days of torture, Mr. Feng was transferred to Wanyaoshu Detention Center. During that time, a lawyer extorted thousands of yuan from his family. Under the extreme pressure in detention, Mr. Feng signed a guarantee statement giving up cultivation practice, but he was still sentenced to three years, along with a four-year home detention. After his release, he was demoted at work and given no salary. In addition, he was forced to report to the Bingcaogang Police Station daily.

In the autumn of 2009, his wife could no longer handle the emotional and financial stress, so she divorced him. She took the house, savings, and their child. Mr. Feng subsequently rented a room in Guaziping.

In September 2009, the Bingcaogang and Guaziping Police Stations sent staff to harass Mr. Feng. They searched his home without a warrant; confiscated Dafa materials and a photograph of Master Li, the founder of Falun Gong; then took Mr. Feng to the Wanyaoshu Detention Center. He was later transferred to Wumaping Prison in Muchuan County.

Mr. Feng was taken to prison in in the depths winter, and guards forced him to stand or sit outdoors for 15 to 17 hours a day, wearing only a thin layer of clothes. He developed a high fever, tremors, dizziness, and shortness of breath. The guards forced him to sit on a concrete floor while memorizing prison rules and regulations. He was not allowed to sleep until after 11 p.m. He was also forced to sing songs eulogizing the Chinese Communist Party (CCP); whenever he refused, he was not given any food. Inmates Zhang Wenming, Lu Xiongchao, and Hu Dajian were ordered by guards to beat him constantly.

After two months of brutal persecution, Mr. Feng's physical condition deteriorated severely; he suffered from a high fever for a month and couldn't stop coughing. At the end of 2006, the prison doctor diagnosed him with tuberculosis and he was taken to another section of the prison for isolation.

Mr. Feng was forced to wear a mask, take medicine, and submit to injections of unknown drugs until he was in critical condition. Due to fellow practitioners' strong condemnation and protests, the prison authorities took him to the Jianwei County Prison Hospital for treatment.

In the hospital, Mr. Feng was tied to his bed and given forced intravenous injections of unknown substances. Prison officials ordered an inmate named Yang to take care of him, but he didn't feed Mr. Feng very often. After ten months, Mr. Feng was transferred back to the prison.

Upon Mr. Feng's return to prison, guards ordered inmates to drag him across the floor. He was extremely weak and could barely catch his breath, yet even in that condition, he was assigned to the top bunk bed. Inmates Huang Yong, Huang Ming, and Yang beat him at will, and threatened, “If you don't take your medication, we'll abuse you daily.” Huang Ming beat Mr. Feng with a club every day for two weeks.

Even when Mr. Feng did take the medications, inmates burned his toes with cigarettes, poured cold water on his head and wet his bedding, then opened the window to allow the cold wind to blow on him. They cursed Falun Dafa and Master Li while torturing him.

On April 28, 2009, Mr. Feng was released after three years in prison. However, he could no longer walk and had severe shortness of breath. The Panzhihua Ministry of Personnel refused to give him basic living expenses following his release, so he was forced to go to southern China to live with his father, who was in his 80s. He was hospitalized in August 2009, where he was diagnosed with pulmonary edema, tuberculosis, and bronchitis. The Panzhihua Ministry of Personnel staff took advantage of his weak condition and forced him to write a guarantee statement, then gave him a 225-yuan ($36 USD) monthly subsistence allowance.

On June 6, 2011, as a result of three years of brutal persecution in prison, Mr. Feng Zhongliang finally passed away.

Additional participants in the persecution of Feng Zhongliang are identified in the Chinese original article.

Related article, available on the Chinese version of Clearwisdom:

“I, Too, Would Like to Become a Fa-Rectification Period Dafa Disciple”