(Clearwisdom.net) On June 12, 2002, Chinese Communist Party (CCP) officials arrested Ms. Ba Lijiang, a Falun Gong practitioner from Hailin City, Heilongjiang Province. Later Bi Xu, female, chief judge of the Hailin City Court, sentenced her to a nine-year prison term. In September 2003, Ms. Ba was taken to Heilongjiang Province Women's Prison. On February 16, 2011, Bao Rui, the deputy warden, humiliated Ms. Ba in public by having two guards sit on top of her and cutting her hair down to her scalp.

At approximately 10:00 a.m. on February 16, 2011, Bao Rui, deputy warden at Heilongjiang Province Women's Prison; Tao Shuping, director at the political department; and two other directors, Cui Hongmei and Zhao Lisha, went to the No. 10 section. They entered the cell and Bao Rui asked the criminals which bed was for practitioners.

Inmates Wang Shuxian, Yang Ping, and several others pulled Ms. Ba Lijiang off the bed, searched it, but found nothing. Tao Shuping said that Ms. Ba's hair was too long, which violated prison regulations. Bao Rui called for two male guards and one female guard, Zhao Lisha. The two men pulled Ms. Ba off the bed and held her down as she struggled. They then sat on her. Bao Rui ordered her hair to be cut short. One criminal inmate thought this was excessive and didn't move. Zhao Lisha grabbed the scissors and cut Ms. Ba's hair. A guard said, “Cut her hair as close to the skin as possible.” Ms. Ba struggled and didn't want her hair to be cut. Many of the other inmates had tears in their eyes as they witnessed this.

Ms. Ba was tortured and not allowed to go outside the prison doors, causing her great physical and mental suffering.

The officials used a score-card to shorten the prison terms of inmates who persecuted practitioners. Zhao Huihua, director of the No. 10 section, and Zhao Xiaofan, deputy director, gave orders to put prison clothes on Ms. Ba and the other practitioners. Ms. Ba clarified the truth about Falun Gong to the inmates and asked them not to persecute practitioners . She told them, “If you do bad things, you will have to pay for it, no matter what you think now.” The criminal inmates said, “We don't want to do bad things, but we have no choice. If we don't follow the order, we will not be released and cannot go home.”

At approximately 8:00 a.m. daily, Ms. Ba and other practitioners were forced to put on prison clothes. Ms. Ba's hands were scotch taped to the bed until 8:00 p.m. Her legs and feet swelled as a result of torture. From 2006 to 2007, the torture of practitioners intensified. She was released from the prison about a month ago, but her legs and feet are still swollen and painful.

Ms. Ba was tortured until just before she was released. Other practitioners in the prison are still being persecuted.

Practitioners were tortured by being suspended by handcuffs in the bathroom, tied up for long periods of tied, forced to sit on a small stool, and detained in an isolation cell.

At the end of April 2005, several practitioners, including Ms. Ba, were suspended by handcuffs in the bathroom daily. They were deprived of sleep and watched so they would not move. Practitioners were handcuffed to a water pipe that was 1.4 meters off the ground. They had to stand and remain still at all times. 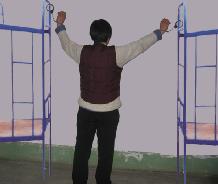 The police said that Ms. Ba was a firm practitioner, so they detained her in a small isolation cell, where it was damp and cold. She was handcuffed around the clock. 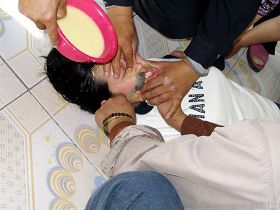 In July, two months after Ms. Ba went on a hunger strike, she was brutally force-fed. Inmate Li Jie put ten times more salt than normal into her porridge, so Ms. Ba spat it out. She was force fed three times daily through a tube that was inserted into her nostril. Several days later, she was taken back to the isolation room. She was extremely weak and had low blood pressure.

At the end of September, five months after Ms. Ba went on a hunger strike, she was transferred from the isolation cell to the No. 1 section. Two weeks later, Kang Yazhen transferred her back to the No. 7 section. 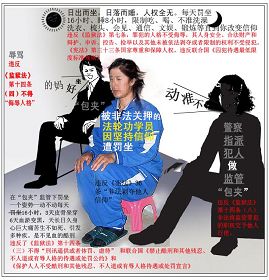 In June 2007, due to sitting completely still on a small stool for a long time, Ms. Ba's cervical vertebrae was injured. She couldn't lift her head and felt excruciating pain in her right leg and arm. This didn't prevent policewoman Dong Lihua from tying Ms. Ba up with ropes.

After she was released from Heilongjiang Women's Prison, Ms. Ba was told that her father had passed away on November 28, 2010. On January 2, 2011, Ms. Ba Lihua; her husband, Mr. Zhang Shujun; and her elder sister and husband, neither one a practitioner, went to deliver New Year couplets in Dongfanghong Dumuhe, where they talked to people about Falun Gong.

“Eliminate Your Human Notions, Cultivate According to Righteous Principles”