(Clearwisdom.net) Today's news from China includes incidents of persecution that took place in 19 counties or cities in 8 provinces. In this report, 10 Falun Gong practitioners were subjected to mistreatment during their detention, and at least 40 practitioners were illegally arrested. 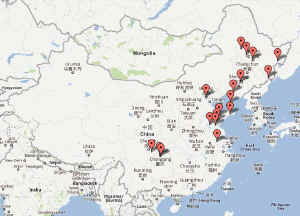 Officer Tian Dejun and others from the local police station in Xia'ertai Township, Changtu County arrested Mr. Yuan Zhongxiang on September 1, 2011 and directly sent him to Tieling Brainwashing Center. Currently, over 20 practitioners are being held at the center.

Ms. Che Xiu'e, 59, was arrested while distributing truth-clarification materials in October 2010 and taken to the Fushun Brainwashing Center. After 32 days of being tortured at the brainwashing center, her blood pressure increased to 280 mmHg. As a result, she was released. However, she was arrested again and sent to Dalian Detention Center. Seven months later, she was sentenced to three years of imprisonment and transferred to Dabei Prison in Shenyang City.

Mr. Zhang Wenye, in his 30s, is from Qingnian Village, Beide Township, Mishan City. He was arrested by Zhao Dexuan, party secretary of the village, and Meng Fanzhu, head of the Village Security Section, on August 31, 2011. He was sent to Mishan Brainwashing Center.

Mr. Chi Yaocai was arrested at home by Zhou Hong from the Domestic Security Division of Tumen City and officers from Shixian Township Police Station on September 2, 2011.

Officers from the Xiachu Township Police Station arrested Mr. Song Wenqing and Ms. Jiang Xiuhong, both over 60, while they were clarifying the truth in the morning of August 26, 2011. Their homes were also ransacked. The police confiscated Falun Dafa books and other items. They were released in the afternoon on the same day.

Mr. Gu Jiushou, Ms. Zuo Xiaolu, Ms. Fu Xinbi and Mr. Zhang Zhihua were arrested in the morning of August 8, 2011 by the local police and the deputy director of Shananjie Community, Shapingba District in Chongqing.

Ms. Zuo Hui and Ms. Wang Jing from Beibei District in Chongqing were arrested at their home in August 2011 and taken to the Sanxikou Detention Center. Ms. Zuo was sentenced to seven and a half years of imprisonment in March 2011 and is currently being held at a women's prison. Ms. Wang Jing was sentenced to three years imprisonment and five years of suspended sentence to be served outside prison.

Ms. Xia Yunji from the Vehicle Section of the Ranghulu Railway Bureau in Daqing City was arrested and taken to Wuchang Brainwashing Center.

Ms. Zhang Xiuli from Fengtai District, Beijing was reported to the authorities while talking to people about Falun Gong and the persecution on August 31, 2011. As a result, she was arrested by officers from Xicuiwei Police Station and her home was ransacked. She is now being held at Haidian Detention Center.

Ms. Sun Hongying was arrested while clarifying the truth at Shuangyangdian Evening Market on August 31, 2011 by officers from Shuangyangdian Police Station in Handing District. She is now held at the Weifang Detention Center.

Mr. Yang Licheng from Tiefeng District, Qiqihar City was arrested by police officers from Xingongdi Police Station in June 2009. Since then, his whereabouts have been unknown. It has been recently disclosed that Mr. Yang had been sentenced to four and a half years of imprisonment and is held at the No. 17 Ward of Tailai Prison.

They ransacked Ms. Zhuo Yujun's home. Ms. Zhuo, in his 70's, is a retired kindergarten teacher who was once selected as a provincial model worker. They tortured her for several hours in an attempt to get a confession. As a result, Ms. Zhuo had to be hospitalized.

Mr. Wu Jifu's wife was seriously ill, but they still forcibly took him into custody. He was later released after his wife was hospitalized.

Ms. Zhang Aifeng from Huangshanpu Township, Yishui County, Shandong Province was detained in a forced labor camp twice, totaling five years. In between, she was held at a brainwashing center for half a year. She was also detained in detention centers and detention houses six times and fined a total of 15,000 yuan.

Liu Chuanbo, head of the Feixian Domestic Security Division; Xue Kaiyong, deputy head of the 610 Office and others arrested Ms. Gao Xiaolan and took her to Linyi Brainwashing Center. Ms. Gao was held for 40 days and more than 3000 yuan (two months of her salary) was withheld. Ms. Gao has since returned home.

“Studying the Fa and Validating the Fa”