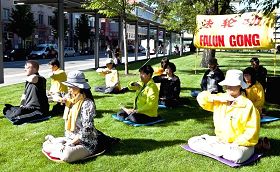 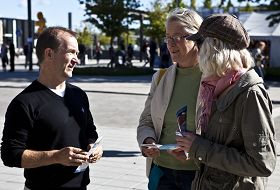 A practitioner talks to people about Falun Gong 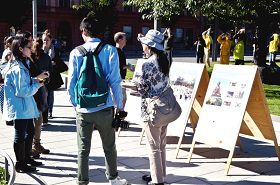 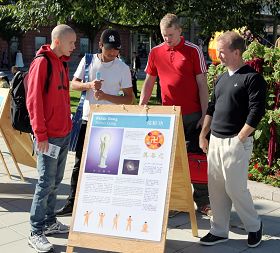 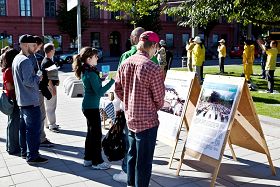 Visitors read the posters to learn about Falun Gong 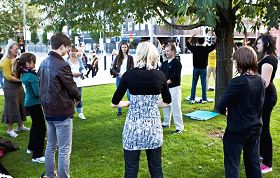 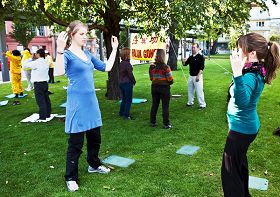 On the second Saturday of every September since 1989, Uppsala has held a one-day celebration of culture from noon to midnight. The festival is therefore referred to as Culture Night. Many local artists and those who love art come to the crowded center of Uppsala, to display and celebrate their wonderful art and culture. Falun Gong practitioners have taken part in this cultural event for several years. This year, they demonstrated the five sets of Falun Gong exercises, displayed posters to introduce Falun Gong, and exposed the crimes of the Chinese Communist Party (CCP) in the persecution of Falun Gong in China.

The practitioners demonstrated the five sets of exercises along with the beautiful exercise music. Many visitors came up to talk with the practitioners and to ask about Falun Gong. Some showed great interest in learning the exercises right away. One middle-aged Swedish man stood near the exercise demonstration and was reluctant to leave. He told a practitioner that he felt comfortable and peaceful and could feel a strong energy. After a while he called his wife over to watch the exercises and said that he and his wife would learn Falun Gong after they returned home.

A Chinese woman who is studying journalism in Uppsala stopped by with her Swedish boyfriend and talked with a practitioner. Her boyfriend was very much interested in Falun Gong and wanted to learn the practice immediately. The woman asked many questions that had confused her in the past. A practitioner answered her questions patiently and she eventually understood the facts about Falun Gong.

A young man and woman who are students at Uppsala University stopped by the Falun Gong activities. When they learned that the Chinese Communist regime had been persecuting this group of kind people who practice Truthfulness-Compassion-Forbearance, they thought it incredible and terrible. The young man said that they all knew that the Communist Party was bad, but he could not have conceived that the CCP was doing such cruel and outrageous things. He said that his mother had a Chinese friend who never wanted to hear anything negative about the CCP. He felt sad for Chinese people who could not tell the difference between the "party" and the "country." The couple condemned the CCP's abuses and the persecution of people's fundamental human rights.

The Lies Are Indefensible

A young Chinese woman surnamed Zhang read the informational posters. She came up and asked about the so-called Tiananmen Square "self-immolation" which happened in early 2001. A practitioner, who was living in Beijing at that time, answered with her own experience, "After 10 o’clock in the morning on that day, the whole of East and West Chang'An Avenues were under martial law. No one could go into Tiananmen Square. All Falun Gong practitioners were under tight control. Think about it, how could those five persons [who set themselves on fire] be allowed to enter Tiananmen Square?” The practitioner then carefully explained to Ms. Zhang about the many discrepancies in the staged self-immolation event.

The young woman nodded as she listened. The practitioner suggested that she read the book Nine Commentaries on the Communist Party and then she would better understand the brutality of the CCP. The practitioner also told Ms. Zhang to quit the CCP and its affiliated organizations, the Communist Youth League and the Young Pioneers, as soon as possible. Ms. Zhang thanked the practitioner for telling her the facts and she said that she would visit the website for quitting the CCP, as well as learn more about Falun Gong.

Xiaoyan, a Chinese practitioner, came from a small town nearby to attend the cultural event with a Swedish practitioner who has been practicing Falun Gong for two years. Xiaoyan has not been able to speak fluent Swedish but she tried her best to talk to all the people who stopped by. She talked from her heart and the kind Swedish people understood her immediately and wanted to learn more about Falun Gong. Xiaoyan noted that more and more people are eager to learn about Falun Gong and no longer believe the CCP lies. She said happily, "The situation has really changed now. The lies are absolutely indefensible."