(Clearwisdom.net) The Truthfulness-Compassion-Forbearance Art Exhibition was held in the city of Vicchio, province of Florence, from August 31 to September 4, 2011. This was during the annual festival “Fiera Calda,” which attracts thousands of visitors. The exhibition tells the story of Falun Gong, the Chinese spiritual discipline which enjoyed a great popularity in the 1990s, but that has been suppressed by the Chinese government since 1999.

At the opening ceremony, Mr. Massimo Pasi, deputy mayor of the Vicchio council, gave a speech.

“I want to thank the organizers for bringing this art exhibition to our area. I do hope that in the future other cities will have the opportunity to hold similar activities,” said Pasi. “I've been informed about the goodness of Falun Gong and about the horrible repression which is still ongoing in China. I think that anyone can see the beauty of the principles of Truthfulness-Compassion-Forbearance. At the same time I'd say it's necessary to inform as many people as possible about human rights abuses in China: it's an issue that in the West is not spread as it should be.” 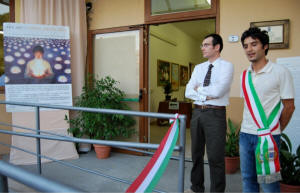 Mr. Pasi also commented on how the council of Vicchio issued a motion to support Falun Gong's peaceful efforts to resist the persecution. The document has been signed by all the city councilors. 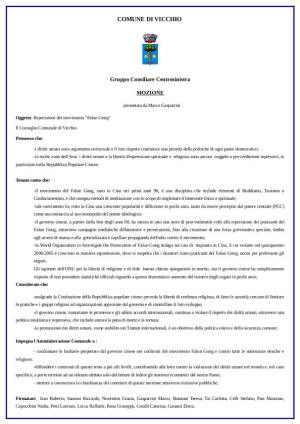 “I think is very important to see how the whole city council approved the motion: Falun Gong principles are universal, as it is condemning the persecution in China,” said Pasi.

Right after the opening ceremony local Falun Gong practitioners gave a guided tour to the visitors. Mr. Pasi especially appreciated the painting titled “Why?” which depicts a child jailed with his mother for practicing Falun Gong. “Seeing the kid's face, he can't understand the reason behind such badness; that really hit me. His face represents the power of life when facing violence,” commented Pasi. 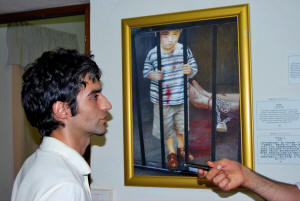 Mr. Pasi comments on the painting “Why?”

Visitors to the exhibition condemned the crimes committed by the Chinese Communist Party against Falun Gong practitioners. They also spoke well of the quality of the paintings and the relevance of this form of art, seeing it as a profound way of communicating with people, much better than present mass media. Many people were willing to tell their acquaintances about the persecution in China. 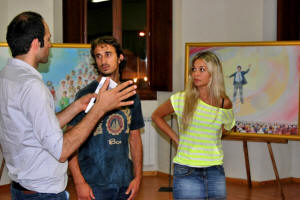 Visitors listening to explanations of the paintings 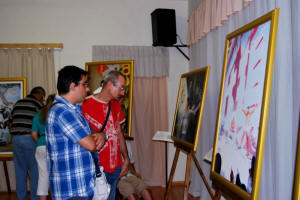 The next day, the mayor of Vicchio, Mr. Roberto Izzo, visited the exhibition. He said that the painting titled “Positioning” had a great influence on him. The painting represents the principle of “good is rewarded, while bad is punished.”

“What I really appreciate in this exhibition, and especially in this painting, is how good people can prevail over evil,” said Izzo. “I'm a Catholic and for me it is very inspiring to see there are people working for peace and justice. The exhibition is very interesting and I hope it'll have the success it deserves.” 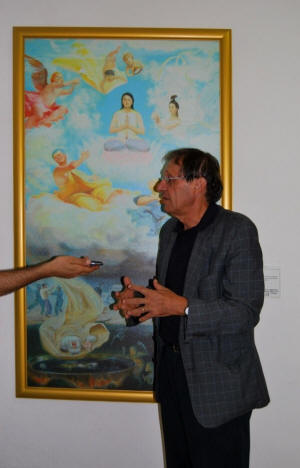 Outside the exhibition room, local Falun Gong practitioners demonstrated the five Falun Gong exercises. Many people were attracted by the gentle movements and the harmonious music. Some of them came the next few days to learn the exercises themselves. 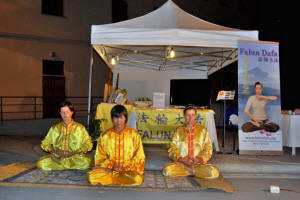