(Clearwisdom.net) A Mid-Autumn Festival celebration was held by the Brisbane City Council's Department of Multicultural Affairs on September 10, 2011. Queensland's Falun Dafa Association was invited for the second time to bring their traditional artistic performances and exercise demonstration to the celebration. The practitioners' performances were well received by local people. 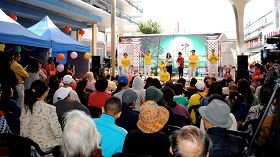 The person in charge of the event said, “Chinese New Year has been the most important festival of the year for the Chinese here, now we've made the Mid-Autumn Festival the second most important occasion. This year we have some new performances from the Falun Dafa Association. There is also another unique Falun Dafa waist drum performance.”

A representative of the Falun Dafa Association introduced the five exercises to the audience. A six-year-old Western practitioner earnestly demonstrated the exercises on the stage. Falun Gong practitioners also presented traditional Chinese dances, waist drum and lion dance performances. A Western audience member watched the exercise demonstration and said joyfully, “We didn't know there is such a tradition. It's really a good experience to see these things we've never seen before.”

Falun Gong, also known as Falun Dafa, is a traditional Chinese spiritual discipline for mind and body. The practice involves slow, gentle movements and meditation. It is easy to learn, enjoyable to practice, and free of charge. Its principles are based on Truthfulness-Compassion-Forbearance. The practice was first introduced by Master Li Hongzhi in China in 1992 and quickly spread by word of mouth throughout China and then beyond. Its beneficial effects in uplifting an individual's physical health, spiritual well-being, and moral character, not to mention its positive influence in the community and society as a whole, have been undeniable. In fact, Falun Gong is practiced by over 100 million people in 110 countries.