(Clearwisdom.net) On September 3, practitioners in Spain held a group practice at the famous Plaza del Callao in Madrid to promote Falun Dafa and raise awareness about the persecution in China. 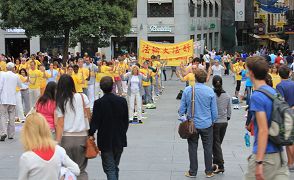 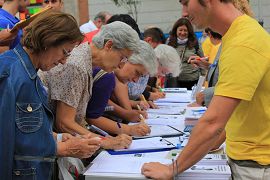 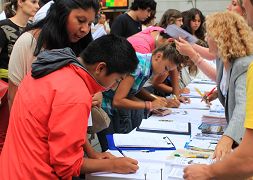 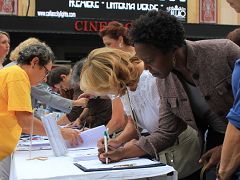 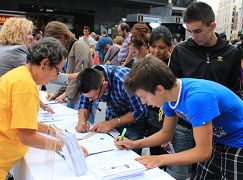 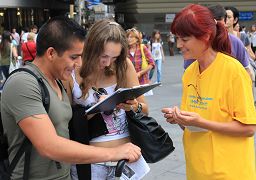 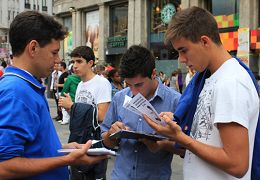 The practitioners demonstrated the five sets of Falun Gong exercises at the plaza. The peaceful exercises attracted many tourists and local residents, and many of them either videotaped or photographed the event. Some also followed along with the exercise movements from the sidelines or joined the lineup for instruction.

A middle-aged man watched the group practice for long time. He told a practitioner: “When I watched the practice, I was very touched and I had never had such a strong feeling.” He said that he planned to read Falun Dafa teachings.

Many people picked up Falun Gong truth-clarifying leaflets at the practitioners’ information table and asked questions. When they learned about the persecution in China, many people lined up to sign the petition in support of Falun Gong.

After signing the petition, a couple told a practitioner that they had a reporter friend and gave the contact information to the practitioner. One of them said, “You can contact this reporter so that more people will learn about the persecution happening in China.”

After reading a leaflet, a priest told the practitioners: “Thank you for the information. I know about the brutality of the Chinese Communist Party. When the Tiananmen Massacre happened [in 1989], I was in Beijing.” He signed the petition without hesitation. Later, he came back and asked for more leaflets. He said that he would distribute them to more people.