(Clearwisdom.net) Friday, September 3, was the first day of the Labor Day long weekend. At around 10 a.m., over a hundred local Falun Gong practitioners gathered in City Hall Plaza in San Francisco to do the exercises as a group. The peaceful music and graceful exercises attracted passersby and tourists. Some took photos, while others talked to the practitioners to learn more about Falun Gong. Several imitated the movements and said they felt a strong, comfortable energy field. 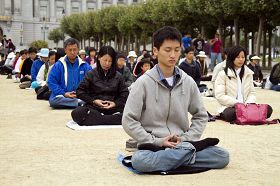 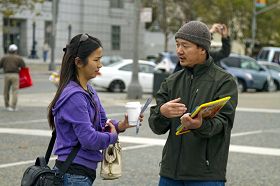 A passerby talking to a Falun Gong practitioner

Surrounding the plaza are San Francisco's City Hall, the state government building, the Asian Museum, the city library, and the San Francisco Symphony. Everyday, groups of tourists from both East and West visit this famous tourist site.

Among the participants in the activity were Chinese, Westerners, engineers from Silicon Valley, PhDs, doctors, old people, and young kids. The slow, orderly movements and peaceful music attracted many passersby to stop and watch.

A local practitioner said that this is a regular Falun Gong exercise site, and that every morning from 7 to 10 a.m., Falun Gong practitioners do the exercises there and clarify truth to the tourists. Since it was the Labor Day long weekend, they organized a large group practice to let the public see the beauty of Falun Dafa.

“Both are Chinese practicing Falun Gong, but there is a huge contrast between the two nations. In one, Falun Gong is welcomed; in the other, Falun Gong is persecuted. I think it is very sad that people don't have the right to practice the exercises legally in China. I wish the persecution of Falun Gong would end immediately.”

Zhang talked about his own experiences after practicing Falun Gong. “One of the benefits of practicing Falun Gong is that both physical health and one's moral level are improved. Since I started practicing it in 1999, the biggest benefit to me, besides improving my health, is that I have become more and more tolerant and open-minded. I can bear and tolerate more, and the ability is increasing constantly. I can bear many unimaginable things. I can accept them all.”

Mrs. Wu from Hong Kong joined the group exercise, too. “In Hong Kong, truth clarification sites are everywhere. The tourists from Mainland China can't miss them. Everyone can see the truth of Falun Gong. Everyone can have a chance to choose his or her future.” She said.

Mrs. Wu had been volunteering at a service center to help the Chinese quit CCP and its affiliated organizations while she was in Hong Kong. “I hope that the residents of San Francisco and the Chinese come and learn the truth about Falun Gong, support us, and stop the Chinese Communist Party's persecution of Falun Gong.”

““The Art of Truthfulness, Compassion, Tolerance” Exhibition Held at the University of Illinois at Urbana-Champaign (Photo)”