(Clearwisdom.net) Today's news from China includes incidents of persecution that took place in 17 cities or counties in eight provinces. As per this report, eight practitioners were subjected to mistreatment during their detention, and at least 15 practitioners were illegally arrested. 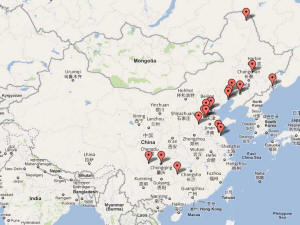 Mr. Liu Jingxun, 70, lives in Huzhong County, Daxing'anling area, Heilongjiang Province. He is currently being held in Tailai Prison Ward No. 10. Guard Yang Zhongfu deprives him of sleep and tortures him until dawn. Mr. Liu has to do hard labor in the daytime.

Ms. Tang Yuhua is retired from the Chenxi County Cement Factory No. 1. She was arrested at home on the morning of July 23, 2011 by county 610 Office agents. They took her directly to the Huaihua City Law Education Base, a brainwashing facility.

Ms. Tang had previously been arrested several times. She was sentenced to three years in prison in 2003, and subjected to brainwashing and forced labor in 2007 and 2008.

Mr. Yu Xide's wife, accompanied by three relatives, went to the Domestic Security Division to demand Mr. Yu's release. Division head Luo Hongjian lied and told them that Mr. Yu would be released after a 15-day detention. Mr. Yu's family asked him to guarantee this promise. He said he couldn't. So Mr. Yu's family found the police head who then collaborated with Luo Hongjian and arrested Mr. Yu's wife and three relatives and held them in the Fuyu County Detention Center.

Under instruction from the Huanggu District 610 Office, Huanggu Domestic Security Division officers and the Jinlong community staff in the Sandongqiao Neighborhood Office arrested Mr. Li Dongxu at work on July 21, 2011 and took him to a brainwashing facility.

Ms. Liang Langui from Tianjin was arrested on May 17, 2011 by officers from the Hedong District Police Station. She was given a one-year forced labor term and placed in the Banqiao Women's Forced Labor Camp. Ms. Liang was put into solitary confinement. Inmates are assigned to monitor her, beat her, deprive her of sleep, force her to sit on a small bench for a long time, and force her to listen and watch things that slander Dafa. Ms. Liang refuses to comply. They starve her; only give her one small steamed bun daily, without vegetables.

9. [Lianyungang, Jiangsu Province] Ms. Yang Fang Faces Trial After Being Detained for Over a Month

Ms. Wang Wenqing, a retired employee from the Dajiti Lejiu Water Pump Plant affiliated with the Wutong Dongfeng Motor Group Co., Ltd., was arrested on June 28, 2011, as she was distributing information about Falun Gong in the Bindao Stadium in Wutong. Local police ransacked her home at 3:00 a.m. on June 29 and confiscated her computer and printer.

Ms. Gong Dexiang, 63, from Zhugentan, Wutong, is retired from the Wutong Gongyi Society. She was arrested in 2008 for distributing information about Falun Gong and held in the Longquanyi Women's Prison in Chengdu City for three and a half years. No information about her has been received since November 2010.

Ms. Ren Sumei from Liuji Township, Jing County, was arrested on July 26, 2011 in Jing County Town. Her whereabouts are unknown.

12. [Jinzhou, Liaoning Province] Mr. Zhao Chengjie Arrested On the Afternoon of July 26, 2011 by Officers from the Nuerhe Police Station

About ten officers from the Xinqiao Street Office and the Renxinqiao Police Station attempted to arrest Ms. He Zuze at her third older sister's home on July 22, 2011. Ms. He was absent at the time.

Three officers who claimed to be from the Jianshe Police Station at the Taiping Police Department broke into Mr. Hou Fengjiu's home on July 24, 2011. They arrested him and confiscated his Falun Gong books.

Ms. Chen Hanwei, about 45 years old, is a former employee from the Junan County Industrial and Commercial Bank. She was sentenced to 18 months of imprisonment in 2002. During that time she was divorced and dismised from her job.

Ms. Li Aihua, an employee at the Bohai Petroleum Vocational College, was arrested on December 18, 2010 by officers from the Renqiu Domestic Security Division for speaking with people about Falun Gong. She has been held in the Renqiu Detention Center for more than seven months. It was heard that she was sentenced to a four-year prison sentence and will be sent to the Shijiazhuang Women's Prison in late July.

Ms. Li Fengchun, 40, is a farmer from Xinlitun Village, Xiaodeyingzi Township, Jianchang County, Huludao City. Her husband Mr. Yu Haiyang and she have lived away from home for a long time to avoid the persecution. Ms. Li was arrested in Shenyang City on July 18, 2011.