(Clearwisdom.net) On the morning of August 27, 2011, several hundred Falun Gong practitioners from around the world held a group practice in Central Park in New York. It was a very peaceful event. The participants ranged from young children to seniors. Many ethnic groups were represented. 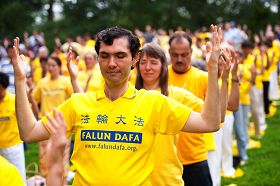 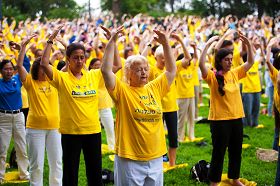 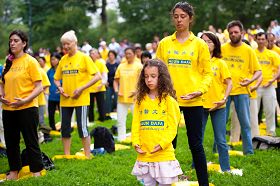 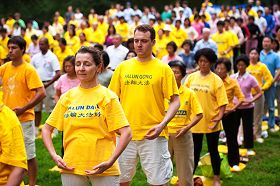 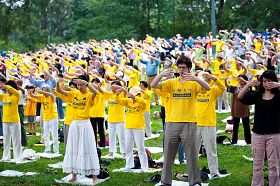 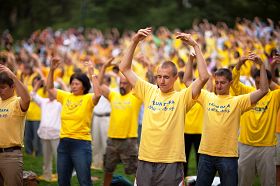 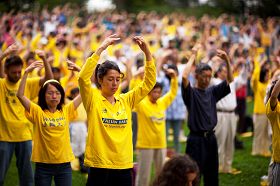 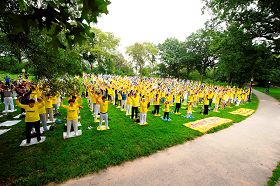 There were several large banners with the messages: “Falun Dafa Is Good,” “Truth-Compassion-Forbearance is Good,” and “Stop the Persecution of Falun Gong.”

The serenity of the event impressed passersby. Many stopped to watch or take photos. A lady from Manhattan said, “They can be here without being affected by the hurricane. It's wonderful.” She seemed very sincere in her admiration.

This peaceful practice has been brutally persecuted by the Chinese Communist Party (CCP) for more than 12 years. In spite of the persecution, practitioners continue to follow Truth-Compassion-Forbearance, tell people the truth about Falun Gong, and expose what the CCP is doing. They want more people to know the facts and help stop the persecution.

Several practitioners told about what they endured at the hands of the CCP and expressed their hope that more people would pay attention to the brutal persecution.

Ms. Li, who now lives in Japan, is originally from China. Her family and many relatives practice Falun Gong. After the CCP initiated the persecution of Falun Gong in 1999, many of them were persecuted in China. She said, “Three members of my relative’s family were detained and tortured. Due to long term torture, one of my relatives was affected mentally. I hope the UN Human Rights Commission and the United States Government will pay more attention to the lack of human rights for Falun Gong practitioners in China.”

Ms. Yu from Indiana was imprisoned in detention centers and forced labor camps in China seven times. Once she was imprisoned for an entire year and forced to do hard labor. Prison guards pressured practitioners to renounce their belief. Ms. Yu said, “They deprived us of sleep and did not allow us to go to the restroom. To force us to give up practicing Falun Gong, they also used hard plastic tubing to hit our faces and elsewhere until we were bruised and swollen.” She wished more people would pay attention to the plight of practitioners in China and help stop the inhuman persecution.

“Firmly Believing in Dafa Despite Torture at a Forced Labor Camp”