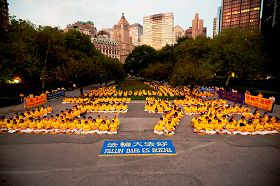 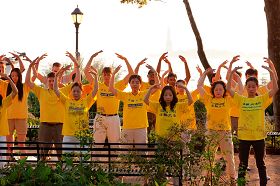 A practitioner from the New York Falun Dafa Association said that the large scale group practice demonstrates practitioners’ uncompromising spirit in protesting the persecution. They also hope more people pay attention to the persecution of Falun Gong in China and help stop it.

Battery Park is located at the south end of Manhattan, near Wall Street and beside South Ferry, the port to board a boat to visit the Statue of Liberty in New York Harbor.

The practitioners participating in the practice included engineers, teachers, government employees, lawyers, doctors, undergraduate students, businessmen, and housewives, covering all walks of life. They wore yellow T-shirts printed with the words “Falun Dafa is great” and “Stop the persecution of Falun Gong”. They formed the two Chinese characters “Righteous Fa” and practiced the exercises following music.

Mr. Duan from Liaoning Province, China is studying for a Ph.D in computer science. He said it was his first time to see a group practice outside of China. He was not surprised, “because America is a country of freedom. I watched a Shen Yun performance during the New Year and felt it was good.”

Ms. Wang from China came to the USA for a tour and participated in the group practice. She said excitedly, “Great! I hope that in the near future practitioners in China can practice the exercise freely in public.”

Ms. Lihua Zhao from Maine said, “My biggest experience in practicing Falun Gong is not only improving my physical health and moral values, but also learning the true meaning of life and how to help others.”

During the event, support for Senate Resolution 232 was requested. The resolution calls for the Chinese Communist Party (CCP) to stop the persecution of Falun Gong and also expresses support for those who have withdrawn from the CCP and its affiliated organizations.

Eroman from the Czech Republic signed the form supporting resolution 232 and said that he understood the practitioners’ dangerous plight in China, because he fled from communist control in Czech 25 years ago. He pointed out, “Suppressed people dislike communism.”