(Clearwisdom.net) On August 21, 2011, University of Illinois University at Urbana-Champaign (UIUC) held an annual event to welcome new students. Local Falun Gong practitioners set up a stand on Quad Square in the central campus to introduce Falun Gong, expose the Chinese Communist Party's (CCP) persecution, and spread the news that more than 100 million Chinese people have quit the CCP and its affiliated organizations. 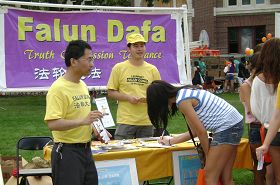 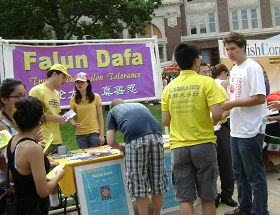 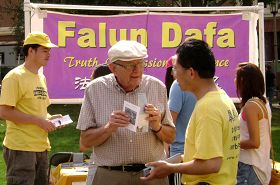 Local Falun Gong practitioners at the University of Illinois University at Urbana-Champaign (UIUC) set up a table with banners and information to introduce Falun Gong at the annual event to welcome new students.

This is the tenth year that local Falun Gong practitioners have participated in this annual event. People seemed eager to hear about Falun Gong, especially students from China. Almost all of the informational materials in Chinese were distributed over the course of the event.

A practitioner spoke with a Chinese student who said that when he was in China, he used software that Falun Gong practitioners had developed to break through the CCP’s information blockade. He took a group photo of the practitioners in front of the banner worded “Falun Dafa.” He said that he would post it on his Facebook page.

Quite a few Chinese students signed the visitor book and left their e-mail addresses, expressing their wish to learn Falun Gong.

A new student from China said that he did not know much about Falun Gong until he traveled to Hong Kong. He said his family knew the CCP’s true nature. After listening to the practitioners’ explanation, he understood more about Falun Gong. He took several copies of informational materials for people around him.

A Chinese student came to the Falun Gong table three times. Each time he returned, he brought more friends to learn the facts also. He said excitedly, “Your golden banner is so eye-catching. You are doing great!”

“Introductory Newsletter on Falun Gong and the Persecution (Images)”