(Clearwisdom.net) Today's news from China includes incidents of persecution that took place in 13 cities or counties in eight provinces. At the time of this report, seven practitioners were subjected to mistreatment during their detention, and at least 24 practitioners were illegally arrested. 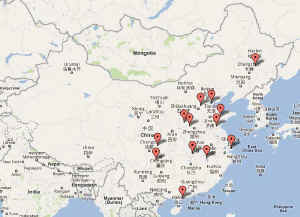 After Mr. Zhu Wenhua was tortured to death in Binhai Prison, practitioner Mr. Li Xiwang was also tortured to death there. In a secret trial, Mr. Li was illegally sentenced to a term at Binhai Prison on July 18, 2011. In the early morning of July 29, his family was notified of his death. To cover up their crimes, the prison coerced his family into hastily cremating his body on August 4.

Mr. Li's wife is still illegally detained at Banqiao Women's Forced Labor Camp in Tianjin, leaving behind her mother, who is in her eighties, and an adolescent daughter at home.

On July 15, officer Chen Zhiqiang and others from the Shashi City 610 Office and Domestic Security Division arrested Mr. Shi Liangyuan. On July 18, they then seized Ms. Wang Qiong and Ms. Liu Ping. They also confiscated these practitioners' computers, printers, paper shredder, other personal belongings, and 9,000 yuan in cash. The three practitioners will soon be tried in court.

On the morning of August 8, Wang Jixian, deputy chief of Houma Domestic Security Department, brought a police officer to the home of Ms. Fu Jinxiu and harassed her. Ms. Fu is in her seventies. They confiscated her books.

Wu Chengshou from Chaijiahe Village in Weicheng District (in Weifang City) was forced to leave home to avoid persecution. He was seized by police again in May, 2011, while he was in a village in Qiaoguan, Changle County. He is currently detained at Weifang Detention Center. His wife, Ms. Wang Xian, has been illegally imprisoned in a forced labor camp for one-and-a-half years, since she was arrested in February, 2010. She is still being persecuted in the Wangcun Forced Labor Camp.

On August 2, practitioners Ms. Zhou Changhua, Ms. Song Suqing, Ms. Yang Xiaoxue, and another unidentified practitioner were suddenly seized by officers from Langzhong City Police Department, the State Security Bureau, and the residential committee. Ms. Zhou was arrested at her home in the early morning by four officers. The police took a laptop and a desktop computer, a portable hard drive, and other belongings.

On the afternoon of August 3, 2011, the head of Jiyuan Domestic Security Division, Li Junqing, along with three other officers, blocked Ms. Chang Lihua's front door. They phoned her husband who was at work, and forced him to return home to open the door with his key. They then took away Ms. Chang, who had just returned home after being forced to leave home to avoid persecution for over three years. Ms. Chang is being held in the Jiyuan City Administration Detention Center.

Mr. Li Fujiang and his wife, Ms. Wang Xinhua, and Ms. Ma Qingzhen from the same village were arrested on August 4. Mr. Li is being detained in a Linyi brainwashing center, while his wife and Ms. Ma are imprisoned in the Linyi Detention Center.

Practitioners from Dianbai County in Guangdong Province were seized by personnel from Shuidong Town Police Station in Dianbai County. Printers, photocopiers, and computers were confiscated, as well as books and over 10,000 yuan in cash.

On August 8, the illegally arrested practitioners were sent to Maoming Brainwashing Center. The next day, a practitioner who went to inquire about their whereabouts was arrested. On July 25, a practitioner's receiver for the NTDTV station and a DVD player were taken from his shop by officers from the Gaodi Police Station in Maogang District.

Practitioner Mr. Lu Xianfeng from Sihe Town, Yushu City was sentenced to three years of imprisonment in January, 2008. The Changchun City Intermediate Court extended his sentence by an additional year. Upon his release after four years of detention in Shiling Prison of Siping, family members went to the prison to bring him home, but Mr. Lu had already been taken away by the 610 Office. His whereabouts are unknown.

On the afternoon of August 9, officers from Dingzhou Police Department took Ms. Xiang Cirong away while she was resting at home. Her husband, Mr. Rui Xi, had already left home and gone into hiding to avoid persecution.

11. [Luzhou, Sichuan Province] Many Practitioners from Gulin County Are Persecuted

Luzhou City practitioner Mr Li Zhongming, was has been detained at the Naxi District Detention Center.

On the morning of August 8, seven or eight police officers from Duchang County Domestic Security Division, including division head Hong Liu, arrested Mr. Cao Dazhang at his workplace for no reason. They later conducted an illegal search of his house, took photos, and confiscated a portrait of Master Li Hongzhi which was hanging on the wall, as well as a calendar with facts about Falun Gong. Under the guise of carrying out a search, they tricked Mr. Cao's daughter into giving them the keys to his car, and they drove the car away. They also took Mr. Cao's elder daughter away at the same time for interrogation.

“Twice Protected from Danger by Master”