(Clearwisdom.net) Today's News from China includes incidents of persecution that took place in 15 cities or counties in 9 provinces. In this report, 13 practitioners were subjected to mistreatment during their detention and at least 12 practitioners were illegally arrested. 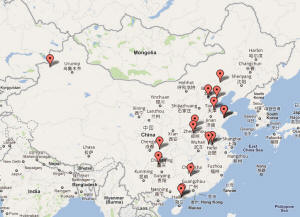 Ms. Xing Limin from Changping District, was arrested by officers from the Domestic Security Division and the 610 Office in February 2011. She is being detained in a forced labor camp.

Officers from the Wuli Police Department arrested Mr. Lin Chunzhe and his wife Ms. Li Yuzhi, on March 24, 2011. They took away Falun Dafa books, Falun Gong DVDs, a cell phone, a DVD player and 5,000 yuan cash. Mr. Lin Chunzhe was released on bail pending a court session scheduled for April 28, 2011. Ms. Li was first sent to the Binzhou City Detention Center and was then transferred to the Wangcun Women's Forced Labor Camp and later to the Jinan Women's Forced Labor Camp. She was released on bail for medical treatment on July 15, 2011.

Officers from the 610 Office of the Pingdingshan Coal Mine Group and personnel from the Security Section of the Eighth Coal Mine arrested Mr. Hou Guozhang, who works at the Eighth Coal Mine, on August 1, 2011. Ms. Wang Xiuqin was arrested at her office the next day. The two practitioners are being detained in a brainwashing center located at the Mapengshan Militia Training Base.

Mr. Wang Jianying is an associate professor at the University of Science and Technology of China. He and his wife Ms. Peng Yujuan were sentenced to six and seven years in prison respectively, by the Baohe District Court. They are being detained in the Hefei Second Detention Center.

Ms. Xiao Wenhua and her husband Mr. Peng Hui, from Fengrun District, Tangshan City, Hebei Province, were arrested by the Jinghe Domestic Security Division at the Highway Inspection Station in Jinghe County, Xinjiang. Mr. Peng is being detained in the Bozhou Detention Center while Ms. Xiao is in the Jinghe Detention Center.

Ms. Sun Xianmin is about 65 years old and lives in an apartment which the Gaomi Court provides to its employees and their families. She was arrested by police while talking to people about Falun Gong in a small market on the night of August 3, 2011. She is being detained in the Gaomi Detention Center.

Mr. Liu Huaxiang was taken away from his home by community member Xie Chanyi and officers from the 610 Office at noon on August 2, 2011. He is being detained in the Yangrenwan Brainwashing Center in Xishan, Nanchong.

Ms. Chen Laifang is a senior engineer in Liuan. She was arrested on July 24, 2011 because she practices Falun Dafa. On the same day, Mr. Li Qiang, who works at the Liuan Water Factory, was taken away from his home.

Ms. Wang Xiaohua from Aohan, Inner Mongolia was arrested by Chen Zhaoxiang, Deputy Secretary of Xinhui Town, Sun Hongwei, and five policemen on August 5, 2011. She is being detained in the Aohan Brainwashing Center.

Ms. Wang Haijun was arrested by officers from the Nanyangxincun Police Station in Zhengzhou on the afternoon of August 8, 2011.

Since June 2011, officers from the Gulin 610 Office have arrested Mr. Zhang Renlin, Mr. Liu Daiqun, Mr. Xu Kai and Mr. Gan Zhongwen in Gulin County and Taiping Town. They are being detained in the Huajing Township Brainwashing Center.

Mr. Wu Zuqiang and his son Mr. Wu Xianjin were taken away from their home by police on October 25, 2011. The police took away a lot of cash and other property. Mr. Wu Xianjun was then sent to the Sanshui Forced Labor Camp in February 2011.

The Gaozhou Court held a session against Mr. Wu Zuqiang, in his 60s, on April 22, 2011 and sentenced him to eight years in prison. Mr. Wu Zuqiang is being detained in the Gaozhou Second Detention Center.

Ms. Chen Xiu and Ms. Li Quanzhen were sentenced in 2009. Their terms were to have ended on July 30, 2011. The two practitioners' terms were extended three months by the Huazhou Politics and Law Committee.

Mr. Wang Weidong was taken to the Tangshan Detention Center on May 25, 2011. Fifteen days later, he was transferred to the Hehuakeng Forced Labor Camp in Tangshan. His family went to visit him on July 4 and August 1, 2011. However the forced labor camp refused the requests.

Mr. Wang was previously detained in the Hehuakeng Forced Labor Camp. As a result of persecution, his body was covered with wounds, and his legs and feet were numb and swollen.

“Stories About the Early Days of the Minghui Website – Part 3”