(Clearwisdom.net) The 62nd Seafair Torchlight Parade was held on July 30 in Seattle. The Divine Land Marching Band, consisting of Falun Gong practitioners, participated in the parade, demonstrating the beauty of Falun Dafa to tens of thousands of spectators and a TV audience. 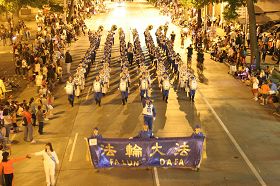 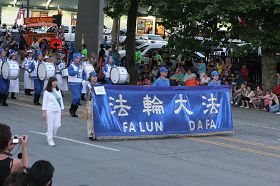 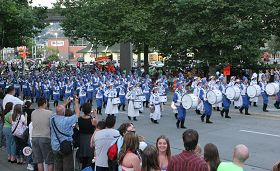 One hundred and eight band members from San Francisco, Vancouver, and Seattle wore blue and white traditional Chinese costumes and performed songs, such as “Falun Dafa Is Good” and “The Fa Rectifies the Universe.”

The Seafair Torchlight Parade is one of the top ten parades in the U.S.A. Tens of thousands of people come to watch it every year. When the Divine Land Marching Band passed by the host stage, the TV host introduced the band, mentioning that all the members practice Falun Gong. He commented that he himself liked this band and the traditional costumes. 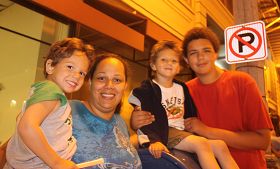 Avery, his siblings and his mother

Many spectators said that they liked the band very much, including Mr. Hong from Hong Kong, who watched the parade with his wife. Avery, an eighth grader, said that he had heard about Falun Dafa before, and learned more at the parade. He commented that Falun Dafa is great. Avery and his family are interested in Falun Dafa and Chinese culture. Mingming, a Chinese kid, said: “I liked the Divine Land Marching Band the most, because their music is awesome, and every member was serious.”

“Bulgaria: Introducing the Practice and the Persecution to People in Plovdiv and Sofia (Photos)”