Ms. Shen Rongxiang from Duchang County was arrested on the evening of August 6, 2011, as she was distributing information about Falun Gong in Sushan Township. Officers from the county's Domestic Security Division made the arrest and tortured her. They tied her to a metal chair and left her overnight. Her hands and feet were tightly restrained by metal bars, and any movement caused excruciating pain. While they interrogated her, the perpetrators from time to time slapped her hands and feet where they were cuffed, causing Ms. Shen's hands to become numb and her feet swollen. After two days of interrogation, the police attempted to send Ms. Shen to a local detention center, but officials there refused to admit her because a physical examination disqualified her. The police thus had to release her. 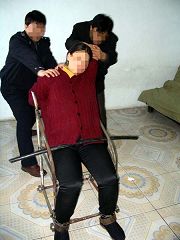 Mr. Cao Dazhang was arrested on the morning of August 8, 2011 by officers from the Duchang County Domestic Security Division. His family did everything they could to find out where he was detained. Mr. Cao's wife found officer Feng Shangjian, who participated in her husband's arrest, at the town's police station that same afternoon, and learned that Mr. Cao was being held at the Public Order Division. She arrived at the division around 4:00 p.m. and found police officers Wu Youlong, Fang Changgen, and a female officer, who had also participated in her husband's arrest. She demanded Mr. Cao's release and requested the return of her son-in-law's driver's license, which had been confiscated that same morning. Even as police officers were denying that Mr. Cao was there, in an interrogation room officers Cao Zhen and an officer surnamed Jiang were interrogating Mr. Cao. It happened that Domestic Security Division head Hong Liu walked out of the interrogation room and said to Wu Youlong and others, “I've never seen such a stubborn person.” He turned around and was surprised to see Mr. Cao's wife sitting there, but refused to let her see Mr. Cao.

Parties responsible for the persecution of Ms. Shen Rongxiang and Mr. Cao Dazhang:

Please see the original Chinese article for the contact information of more people and offices involved in the persecution.

“Clarifying the Facts About Falun Gong While Removing Attachments”