Ms. Ding was sentenced to eight years in prison in July 2008 and has been incarcerated in the Liaoning Province Women's Prison. Trying to force her to give up her faith, the prison authorities put her in a small confinement cell and used all kinds of ruthless methods to torture her. When Ms. Ding's family members arrived to see her one afternoon in September 2008, prison officials made all kinds of excuses to keep them from seeing her. When her family went to see her two years later, on August 2, 2010, the prison authorities only allowed her husband to see her after prolonged negotiation. She was carried out of her prison cell on a stretcher; she was skeleton-like, spoke haltingly, and was very feeble.

Ms. Ding started practicing Falun Gong in 1996. Within two weeks, all of her medical problems, including stomach disease, a spinal disc herniation, and pain in her teeth, were gone. She decided to abide by Falun Gong's principles of Truthfulness-Compassion-Forbearance and be a good person.

In July of 1999, the Chinese Communist regime launched the cruel persecution of Falun Gong. In November, Ms. Ding and her husband were arrested and taken to the Dalian City Detention Center, where they were held for 22 months. During that time, detention center head Wang bound her to a metal ring on the ground twice. The first time was for 10 days, and the second time was for over 40 days. She couldn't raise her head or sit up with her back straight. Her hands and feet were fastened together. Once, she was bleeding badly because of it. Wang also ordered an inmate to beat her. Two years later, in September of 2001, Ms. Ding was illegally sentenced to three years in prison and taken to Dabei Women's Prison in Shenyang City, where she was incarcerated for 15 months. 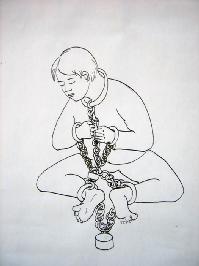 Torture illustration: Bound to a metal ring on the floor

In July 2003, Shidao Street Police Station officers arrived at her home, ransacked it, and arrested her. While in Yaojia Detention Center, the guards brutally struck her. Then they handcuffed and shackled her, and dragged her to the third cell of the 7th Prison Ward. Using an extremely cruel torture technique referred to as the “Stretching Bed”, her hands and legs were spread apart and tied to a bed. To protest her imprisonment, Ms. Ding started a hunger strike. Guard Su Ying, prison doctor Wang Ying, and an individual named Jia Ling brutally beat and force-fed her every day. Ms. Ding was close to death from 59 days of hellish torture. The center officials notified her family to come and take her home. She was so thin that her family members barely recognized her.

Ms. Ding was reported and arrested for speaking with people about Falun Gong on a bus on August 19, 2004. She was incarcerated in the Yaojia Detention Center for four days. More than eight guards and prison doctors including Su Ying, Wang Ying, and Jia Ling tortured her around the clock. After that she was sent to Dalian Forced Labor Camp. The guards tried to force her to renounce her faith by subjecting her to barbaric torture methods. The guards made her stand inside a metal cage for five days, and after that put her on the "Stretching Bed." They immobilized her by placing her arms and legs onto a metal bed frame and wrapped up her feet and hands with tape. They put three wooden boards under her body and a thick, heavy hat over her head. They sealed her mouth and nose with tape, poked two holes in the hat for her to breathe, and made another hole to force-feed her. They fed her with food waste, garlic paste, human urine, and even live spiders. Inmate Wang Chong, who was serving a sentence for fraud, put over two dozen live insects on her body, and at the same time pushed pins into her feet. The guards continued the obscene torture by inserting a malformed steel tube into her mouth, and [having removed the tape] pried her mouth open with chopsticks to force feed her. Ms. Ding's mouth and tongue sustained severe injuries. Yet, the evildoers still poured basins of dirty water over her. Ms. Ding was covered with injuries. When Wang Chong left, Lu Jing replaced her. Lu Jing and someone named Zhang stabbed toothpicks and pins into her toes. When Ms. Ding was about to die, the two perpetrators locked her inside the metal cage and forced her to stand.

When Ms. Ding was in the No. 1 Strictly Controlled Ward, the guards and inmates wrapped her entire body, including her head, in plastic sheets several times, leaving only two holes for her to breathe. Then they carried her to the metal cage and tied her to the frame. Following that, they pushed two one-inch wide wooden slats between her feet and the frame. Overnight Ms. Ding's feet swelled tremendously. This torture was even more brutal than the Tiger Bench. 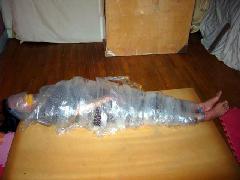 Ms. Ding was held in Masanjia Forced Labor Camp between October 29, 2004 and May 29, 2005. She was locked in a solitary cell three times for a total of 35 days. The first time she was handcuffed and tied to a metal bench for 16 days. The second time, after being tied to a metal bench for 10 days, she vomited blood. The prison doctor still force-fed her, and she was sent to the hospital. The hospital doctors said not to force-feed her, but the guards force-fed her anyway. The third time, she was locked in a solitary confinement cell for nine days. Ms. Ding was eventually tortured so severely that she could no longer speak, and her tongue was covered with sizable lumps. Following the prison doctor's diagnosis of a stroke and gall stones, she was on the verge of death. Masanjia officials notified her family to take her home the same day she was diagnosed, because they did not want to be held responsible for her death. Once again, her family could barely recognize her.

On August 16, 2007, Ms. Ding was arrested by a group of officers from the Kuiying Police Station, led by Tian Li, the deputy director. She was immediately transferred to Yaojia Detention Center and held for 11 months. She was given an eight-year sentence in July 2008 and imprisoned in the Liaoning Province Women's Prison 9th Ward. Prison guard Li Heqiao tried to force her to “reform" by locking her in solitary confinement and using different kinds of brutal torture. Two months later, Ms. Ding began to suffer from heart problems, high blood pressure, and symptoms of a stroke.

Ms. Ding's sisters went to visit her at the end of February 2008. Li Heqiao told them that Ms. Ding was hospitalized and no visitation was allowed, and the family would be notified when it was time to visit. Li also told them to prepare for the worst. It was apparent that Ms. Ding was in a bad situation and they didn't want the family to find out. Ms. Ding's sister said, “It is because you tortured her! She didn't have those illnesses before.” Li said, “Though she didn't have the illness before, that doesn't mean she cannot have it now.” Ms. Ding's family got a phone call in August saying that only Ms. Ding's husband could go to visit her. While her husband visited her, she was emaciated and had only about four teeth left. Her hands were behind her back.

The guards started another round of abuse after the visit. They ordered several of the most vicious inmates to do it. Those inmates beat her, swore at her, made her stand for prolonged periods of time, and deprived her of sleep. Between November and December 2008, Li Heqiao hung her from the heating pipe and beat her severely. Ms. Ding was hung for seven days. She was at her last gasp when she was let down. Li ordered the inmates, “You must be hard on Ding as long as she keeps breathing. Otherwise, I won't give you extra points. Do you know what it means? It means no reduction in prison term.” Upon hearing that, the inmates swore at Ms. Ding and beat her even harder.

One year later, Ms. Ding's family made several requests to visit her in May 2011. The prison officials let the elder sister see her. Ms. Ding was in good spirits. Li Heqiao had been transferred to another place and another person surnamed Wu had taken over. Wu used different tactics. She didn't beat or swear at Ms. Ding, but chatted with her about everyday family affairs. She even bought eggs and milk powder for Ms. Ding. Two months later, on July 18, Ms. Ding's elder sister received a phone call from a guard surnamed Ding saying that Ms. Ding had a stomach ulcer and was on an IV drip. Wu said that Ms. Ding started another hunger strike ten days after the visit. Wu said that it was a result of her long-term hunger strike. When Ms. Ding's elder sister asked to see her one more time, Wu refused. The next day, Ms. Ding's younger sister called Wu asking about Ms. Ding's situation and requesting her release. Wu said that she didn't meet the requirement.

The prison officials called Ms. Ding' husband on July 26 and asked him to come to the prison. When he met her, she was lying down and couldn't get up; once again, she was skeleton-like, speaking haltingly, and very feeble. She only said, “I want to go home.” Her husband asked her why she hadn't been eating. She pointed to her stomach, meaning that she couldn't eat anything. Her husband said that if she waited for him for two days, he would get her out. She waved her hand a little and couldn't make another sound. The prison officials called the husband the next day, saying that they agreed to release Ms. Ding on bail. In the meantime, Ms. Ding was sent to Shenyang City No. 739 Hospital.

The prison officials called Ms. Ding's husband on July 30 and told him to come quickly. They sent someone to help him with the procedure. However, when Ms. Ding' husband arrived at the hospital, she was dead already. She wasn't breathing, and her heart was beating with the help of a pacemaker implant. According to a doctor, when one is dying, the heartbeat could be maintained for a while, but the brain is dead.

When Ms. Ding's family arrived at the hospital on August 1, there were about 30 guards sent by the prison. The guards were recording and videotaping how the doctors were rescuing Ms. Ding. The family questioned them why they would rescue someone after she died. They answered, “Ding chose this path. We tried our best. You see that we are at the hospital and we have video. Wherever you file a lawsuit, we are not afraid.”

Ms. Ding's sister recalled that the guards were recording and videotaping when she visited Ms. Ding on May 13. They were trying to create the impression that Ms. Ding lived happily in the prison. During the last two months, they likely gave her unknown drugs that led to her death.

Ms. Ding's family is appealing to the public to investigate the real cause of Ms. Ding's death and uphold justice for Ms. Ding and her family. Each individual who was involved in persecuting Ms. Ding should be punished by law.

“Practitioners Severely Injured After Being Chased By Police in Jixiang County, Shandong Province”