(Clearwisdom.net) Mr. Jiao obtained the Fa near the end of 1994, and experienced health improvements and inner peace as a result of the practice. However, he has been arrested and tortured several times since the Chinese Communist Party began its persecution of Falun Gong on July 20, 1999.

When Mr. Jiao went to Beijing to appeal on February 25, 2000, he was arrested outside the Civil Complaints Office by plainclothes police. He was handed over to the Jixian County Domestic Security Division and was taken to the Jixian Detention Center. Mr. Jiao was seen practicing the Falun Gong exercises in the detention center, and was tied to a metal frame. 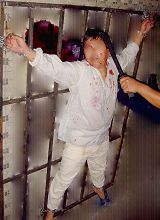 In order to protest his persecution, Mr. Jiao went on a hunger strike. The guards dragged him to the restroom and threw a bucket of urine over him. The head of the detention center, with the last name of Chen, then ordered half a dozen inmates to hold down Mr. Jiao's head, hands and feet. He then thrust a wooden stick into Mr. Jiao's mouth, breaking some of his teeth. Chen then inserted a rubber hose down Mr. Jiao's throat and poured salt water into his stomach. He was detained for 111 days and was not released until June 27, 2000.

The team leader of Jixian Domestic Security Division, Wu Hua, and the deputy head of the local Public Security Bureau, Geng Zhendong, led several officers to the Jianxin Middle School cafeteria on June 10, 2001 to arrest Mr. Jiao Lingyun and two other practitioners. They ransacked his home twice and confiscated many of his personal belongings, including 3,000 yuan in cash.

“How I Resisted the Evil Persecution”