Chinese version of the Book Bloody Harvest Launched in Taiwan

(Clearwisdom.net)The Chinese version of the book Bloody Harvest, exposing the Chinese Communist Party’s (CCP) atrocities of harvesting organs from living Falun Gong practitioners, was launched recently in Taiwan. The book arrives at 52 different elements of proof that supports the conclusion that live organ harvesting from Falun Gong practitioners is taking place in China.

The book's two authors, who were also 2010 Nobel Peace Prize nominees, attended the launch held at the Legislative Yuan (the national legislature) in Taiwan on June 28. 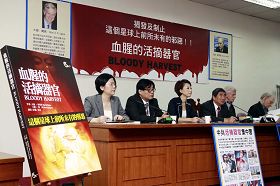 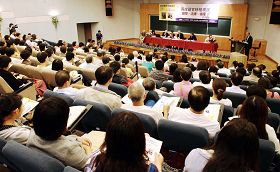 Both authors, David Kilgour, who was the former Canadian Secretary of State (Asia-Pacific), and David Matas, the award-winning international human rights lawyer, spoke.

David Kilgour said that since 2006, he and David Matas had traveled to four continents and more than 40 countries, breaking through various obstacles to collect evidence, and arrived at the conclusion that large-scale live organ harvesting from Falun Gong practitioners did happen and continues even today. 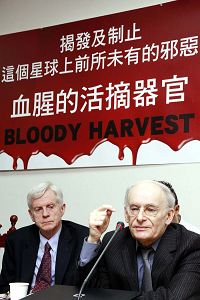 David Matas speaks at a press conference held on June 28

He gave an example of a Taiwan patient, who was to receive a kidney transplant in China. He said that the patient waited for a fresh kidney in the hospital. Seven kidneys were sent and could not be used. The eighth kidney arrived and was accepted. Mr. Kilgor said that the patient has a right to live, but has no reason to sacrifice other innocent lives. 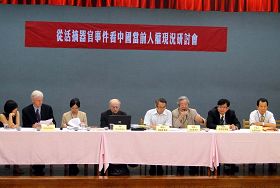 Taiwan legislators Tien Chiu-Chin, Chai Trong-Rong, and Chen Ting-Fei said that Taiwan should prevent its citizens from going to mainland China for organ transplants. They will help to push forward a bill that makes using an unknown organ source for transplantation a crime.

Director of the Taipei Veterans General Hospital medical research division Guo Zhendian said that when the Chinese Communist Party is condemned for such atrocities as live organ harvesting, the medical community and people of Taiwan cannot stay silent.

Theresa Chu, spokesperson for the Falun Gong Human Rights Lawyers Working Group in Taiwan, urged the government of Taiwan and the presidential candidate to address this unprecedented evil, because the Taiwanese people might unknowingly become its accomplice.