(Clearwisdom.net) On July 23, Falun Gong practitioners from San Francisco held a parade and rally in the downtown area to peacefully protest the 12-year-long persecution in China. They called for justice and for help in stopping the persecution. 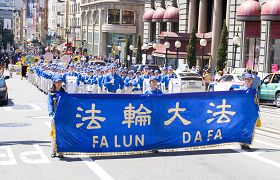 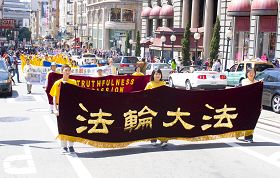 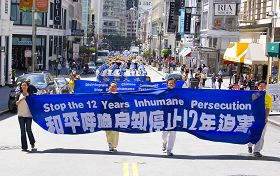 The parade winds through the business area. 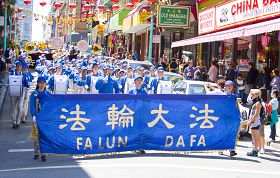 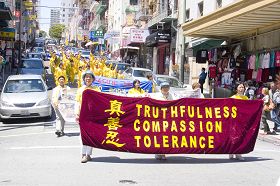 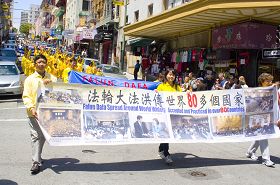 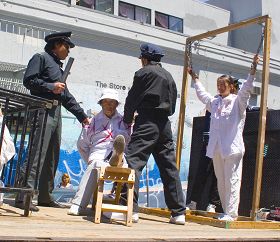 Re-enacting of torture methods used on practitioners in China 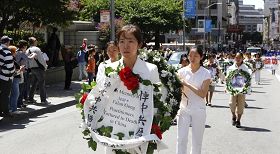 Commemorating those tortured to death in China 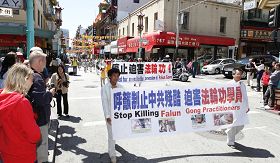 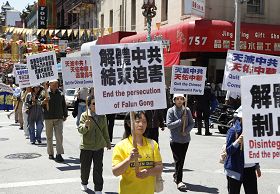 The parade goes through Chinatown.

The parade started at 11:30 a.m. from Powell Street, proceeded through the busiest streets in the downtown area, and ended in Chinatown. The Divine Land Marching Band led the whole group. Following the band were exercise demonstrations, a torture re-enactment, wreaths commemorating those tortured to death, and a banner team.

Many people were attracted to the parade. They accepted truth-clarifying materials from practitioners, talked to them, and took photos. Some expressed their support of Falun Gong after they learned about the facts of the persecution, and thanked practitioners for bringing the information to them.

From 12:30 to 2 p.m., practitioners held a rally in Chinatown. Several practitioners told their own experiences of being persecuted.

Ms. Gu Xifang, a Falun Gong practitioner who just escaped China with help from friends, told the story of her and her family members' experiences. Between 1999 and 2002, Ms. Gu was arrested nine times for practicing Falun Gong. In 2002, she was sentenced to 5 years in prison. In the prison, she was beaten with electric batons, and hung up with her hands bound behind her back. To protest the torture, she started a hunger strike, and then was bound to a metal bed with her limbs stretched out for several days. She was badly tortured simply because she refused to renounce Falun Gong.

Pu Dongwei, a Falun Gong practitioner, wrote to the Chinese government soon after the persecution was launched in July 1999, telling them the truth about Falun Gong. He and his wife, who also practices Falun Gong, were arrested after the letter was sent. They were jailed in a labor camp in 2000, where Mr. Pu was forced to wrap chopsticks for more than 10 hours every day. He was not allowed to sleep until he finished his assignment. Mr. Pu said that the Chinese Communist Party is afraid that its evil behavior will be exposed. He said that the illegal enslavement of Falun Gong practitioners in that labor camp was exposed to the international community, so when he was arrested for the second time, and jailed in the same labor camp, he found that that labor camp didn't force Falun Gong practitioners to wrap chopsticks anymore.

Mr. Pu said that the persecution of Falun Gong is very severe in China. People can be arrested only because they have a copy of Zhuan Falun. Mr. Pu hopes that people in the U.S.A. can learn more about Falun Gong, and also recognize the evil nature of the Communist Party.

Other speakers at the rally called upon the public to support Falun Gong, and support the belief in Truth-Compassion-Forbearance.

“Belgium: Spreading the Fa at the National Day Celebration (Photos)”

“Falun Gong in the View of a Canadian Philosophy Scholar”