(Clearwisdom.net) On the evening of July 20, 2011, Falun Gong practitioners in Schwarzwald, Germany, held a protest in Freiburg to protest the persecution against Falun Gong begun by the Chinese Communist Party (CCP) on that day in 1999. They also held a candlelight vigil to commemorate their fellow practitioners in China who have been killed, as well as to expose the facts of the persecution and to call for an end to the CCP's heinous campaign. 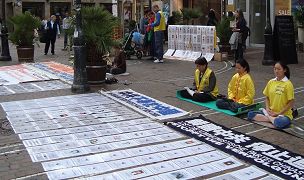 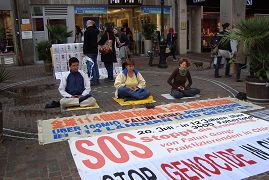 Practitioners' protest at a crossroads in the center of Freiburg

The protest was held at a crossroads in downtown Freiburg in the evening. Banners were laid on the ground along the sidewalks. The banners read: “Falun Dafa is great”, “100 million people practice Falun Gong in over 100 countries all over the world,” “Disintegrate the CCP and Stop Persecuting,” “Stop torturing and killing Falun Gong practitioners in China,” “Commemorating 3400 Falun Gong practitioners who have died as a result of the persecution.” There were also photos of some of the deceased practitioners. Small candles were lit around the banners and the photos.

Several protesting practitioners were serenely meditating in front of the photos of their fallen fellow practitioners. Many passersby stood and watched. Some went up to the practitioners, asking for informational leaflets and what Falun Gong was all about and why it has been brutally persecuted for 12 years in China. Others took pictures. Some even sat next to the meditating practitioners to show their sympathy and support. 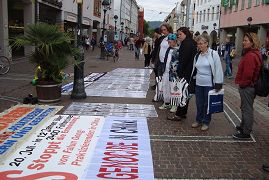 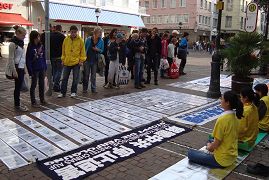 A German woman asked what the activity was about and why it was so solemn. When she was told about the 12-year persecution of Falun Gong in China, she said that people should let their governments and council members know about this and push them to stand up and to stop the CCP's human rights abuses. If everyone is indifferent and allows such an outrage to continue, in her opinion it would be shameful because politicians and governments which should be morally responsible. When she found out that such protests had been held in many countries around the world, she was surprised but pleased. She said, “I support you all! Good luck!”

Several Chinese students stood in front of the photos and read each carefully. One student said, “I have heard in China that China has the world's largest human specimen processing plant. A German has set up a plastination company in Dalian and made a lot of money. It is said that many of the bodies were Falun Gong practitioners.”

A Chinese visiting scholar came, too. She stood and read and added that, since she left China, she has found on the Internet that China not only has a “human specimens” business but also a large organ transplant business, and that the number of executed prisoners is far less than the number of transplanted organs, so the organs had been also harvested from Falun Gong practitioners. Two of the Chinese students right away wanted to quit the CCP and its Youth League and Young Pioneers.

“July 20 in Chicago: Candlelight Vigil in Front of Chinese Consulate Marks the 12th Anniversary of the Persecution of Falun Gong in China (Photos)”

“Germany: Series of Activities in Bayreuth Expose the Persecution of Falun Gong in China (Photos)”