(Clearwisdom.net) On July 20, 2011, Dutch Falun Gong practitioners held activities in front of the Chinese Embassy in the Netherlands to mourn fellow practitioners who have been persecuted to death by the Chinese Communist Party (CCP). They exposed the CCP's twelve-year persecution of Falun Gong and appealed to all circles of society to help stop the CCP's atrocities. 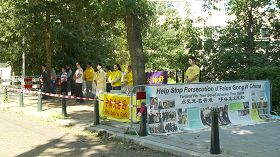 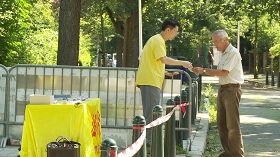 Talking to people about Falun Gong and the persecution

On July 20, 1999, 12 years ago, the Chinese authorities mustered the entire state machinery to launch a brutal and systematic persecution against tens of millions of innocent Falun Gong practitioners who were cultivating according to the principles of Truthfulness, Compassion, and Forbearance. From that time onward, lies and slander overwhelmed the media. High-pressure tactics, including forced labor and torture, were unleashed on practitioners to persecute them in mind and body. According to the Minghui website (Chinese version of Clearwisdom), as of July 20, 2011, the confirmed number of practitioners who have died due to the persecution has reached 3,428. Millions of Falun Gong practitioners have been illegally detained, tortured, “disappeared,” and the CCP has even harvested organs from living practitioners for huge profit in organ transplantation surgeries.

Since the persecution began, regardless of the heat of summer or the cold of winter, Falun Gong practitioners across the world have engaged in various peaceful activities to clarify the truth to people. These activities have continued for 12 years, unceasingly. Currently, Falun Gong is embraced in over 100 countries and regions all over the world, has received praise from various levels of government, elected officials, and non-governmental organizations. The practice has received over 3,000 proclamations of support. The teachings of Falun Gong, contained in the book Zhuan Falun have been translated and published in over 30 languages.

The rally began at 10 a.m. The atmosphere at the rally was solemn. Practitioners who experienced torture in China exposed the cruelty of the persecution using their first-hand personal experiences. Many onlookers took flyers from the practitioners. Passers-by and on-duty police officers also stopped to listen and take pictures.

“Recognizing and Letting Go of Self”