(Clearwisdom.net) On the evening of July 20, 2011, Falun Gong practitioners in Jakarta, Indonesia held a candlelight vigil in front of the Chinese Embassy to commemorate fellow practitioners who were tortured to death by the Chinese Communist Party (CCP) and expose the CCP’s brutal persecution of Falun Gong for 12 years. 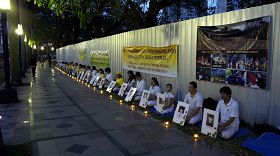 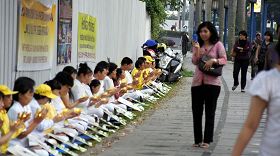 Candlelight vigil in front of the Chinese Embassy.

In the evening, practitioners wearing white clothes or yellow T-shirts held portraits of fellow practitioners tortured to death in China. They sat in front of the Chinese Embassy in a line that went for more than 100 feet. The event caught the attention of passers-by, and many stopped to learn about Falun Gong.

Falun Gong, also known as Falun Dafa, is a traditional Chinese spiritual discipline for mind and body. The practice involves slow, gentle movements and meditation. It is easy to learn, enjoyable to practice, and free of charge. Its principles are based on Truthfulness-Compassion-Forbearance. Master Li introduced the practice in China in 1992 and it quickly spread by word of mouth throughout China and then beyond. Its beneficial effects in uplifting an individual’s physical health, spiritual well-being and moral character, not to mention its positive influence in the community and society as a whole, have been undeniable. In fact, Falun Gong is practiced by over 100 million people in more than 100 countries. The main works of Falun Gong are available in over 30 languages.