(Clearwisdom.net) Falun Gong practitioners in the Selangor area, Kuala Lumpur, Malaysia, gathered in front of the Chinese Embassy at 6:30 p.m. on July 20, 2001, to protest the Chinese Communist Party's (CCP's) brutal persecution over the past 12 years and to call for international society to work together to end this unprecedented human rights catastrophe. 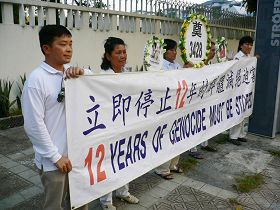 It was rush hour in Kuala Lumpur. Falun Gong practitioners, dressed in white and holding wreaths and candles, unfolded a banner stating “Immediately Stop the 12-Year-Long Genocidal Persecution.” The somber scene caught the attention of passersby. The police were also handed truth-clarification materials by the practitioners.

Ever since the brutal persecution was launched by Jiang Zemin's regime on July 20, 1999, 3428 confirmed deaths have been reported on the Minghui/Clearwisdom website. The actual number of victims far exceeds the number confirmed deaths. Practitioners around the world hold activities on July 20 every year to protest the persectuion.

Ms. Yang, a practitioner from China, said, “What we are against is not China but the CCP, because the CCP not only persecutes Falun Gong, but also people of other faiths, the traditional culture, social justice, and one's conscience.”

Twelve years have passed since the CCP decided to try to wipe out Falun Gong. Falun Gong has been embraced in more than one hundred countries around the world. In the face of this persecution, practitioners in China and overseas have been clarifying the truth of Falun Gong with great compassion. More and more people have learned the benefits of Falun Gong.