(Clearwisdom.net) On July 17, 2011, practitioners in Bangkok, Thailand held activities to call attention to the 12-year persecution of Falun Gong by the Chinese Communist Party (CCP). They asked people to support and work together to stop the CCP's atrocities. 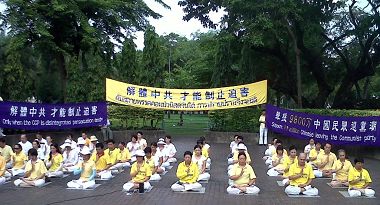 Practitioners in Bangkok, Thailand hold activities calling for an end to the persecution 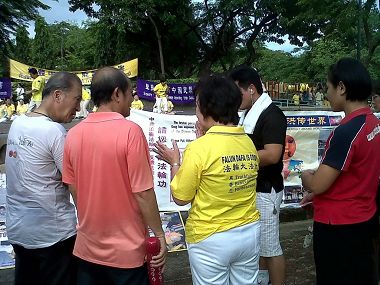 A practitioner speaks with passersby about Falun Gong 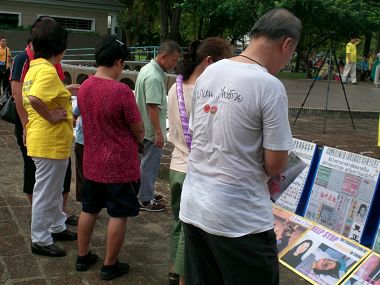 Practitioners do the exercises together in a Bangkok park 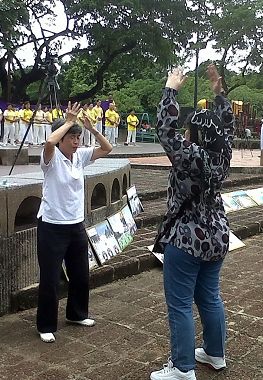 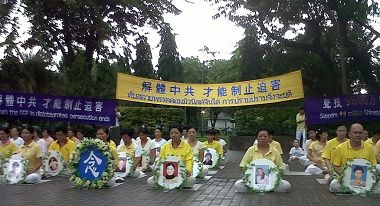 The activities began at 5:00 p.m., as practitioners held banners reading “Only by disintegrating the CCP can the persecution end,” and other messages. They displayed truth clarification placards to raise people's awareness about the CCP brutality, and call for an end to the persecution. Practitioners also demonstrated the five exercises to display Falun Dafa's peacefulness and goodness.

The practitioners held a candlelight vigil at dusk. Carrying wreaths with photos of practitioners killed in the persecution, practitioners commemorated those who have lost their lives for their beliefs.

According to figures from the Minghui/Clearwisdom website, up to now at least 3413 Falun Gong practitioners are confirmed to have been persecuted to death. Experts estimate that the actual figures are much higher. Hundreds of thousands of Falun Gong practitioners have been tortured in prisons, forced labor camps, and psychiatric hospitals. Moreover, the CCP-controlled military, public security, judiciary, and health care system have collaborated with each other to harvest organs from living Falun Gong practitioners in one of the most horrendous crimes in human history.

For over twelve years, practitioners have been constantly speaking out about the truth of Falun Gong and exposing the CCP's crimes in a tireless effort to end the persecution.

“Indonesia: Practitioners Continue Their Efforts to Raise Awareness of the Persecution in China (Photos)”