I Obtained a Second Life After Finding Falun Gong (Photo)

(Clearwisdom.net) Ms. Pak Im Soon, dressed in a traditional Korean outfit said to me, “I obtained a second life after I found Falun Gong. Thank you, Master!” She was so happy that she joined the grand parade protesting 12 years of persecution in Washington, DC, on July 15, 2011. She began cultivation only five months ago and thinks that Falun Gong is miraculous. Her husband, Lee Jong Dae, was a cancer patient, and his cancer was cured soon after the couple started cultivating. Her diabetes disappeared, and both are enjoying good health in mind and body. 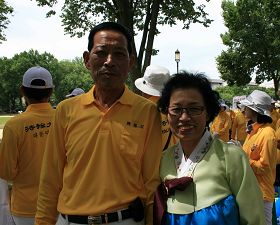 Mr. Lee Jong Dae and his wife, Pak Im Soon, during the DC parade on July 15

Seeing so many fellow practitioners from around the world, Ms. Pak was very excited. She said that when she and her husband saw a Shen Yun Performing Arts show five months ago, she felt that she was on top of the clouds. Her husband said the anti-cancer drugs were not working, and cultivating Falun Gong would be great. On a bus ride home, they expressed their wish to purchase Falun Gong books, and their illnesses were gone soon after.

“Victims of the Persecution Among the 2,500 Falun Gong Practitioners to March in Washington DC (Photo)”