(Clearwisdom.net) On July 16, 2011, the annual Falun Dafa Cultivation Experience Sharing Conference in Washington D.C. was held at Constitution Hall, with more than 4,000 practitioners from all over the world in attendance. 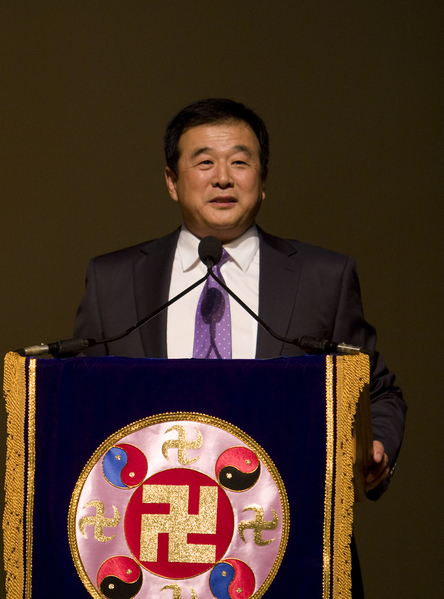 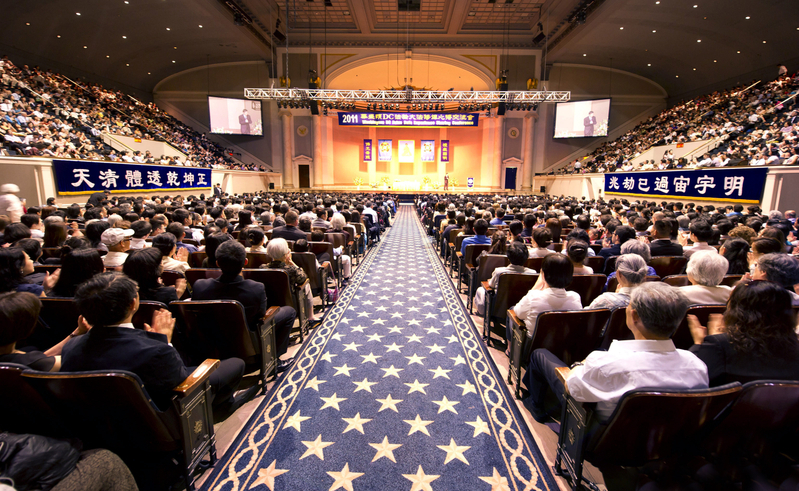 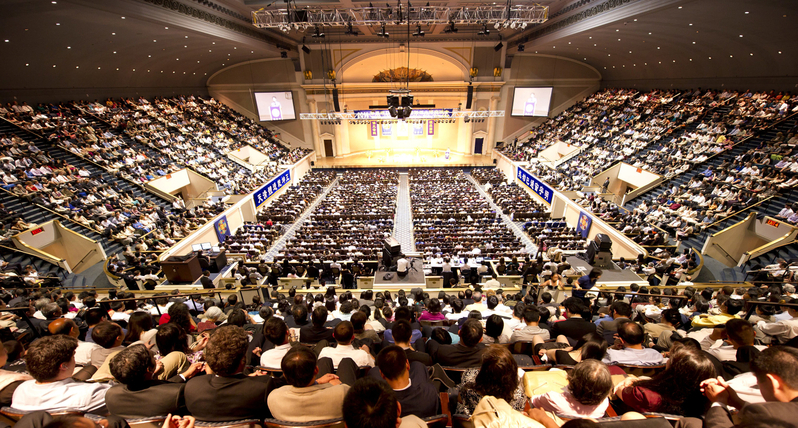 At around 2:50 p.m., Master Li Hongzhi appeared at the conference, and all Dafa disciples stood up and gave enthusiastic, prolonged applause. Revered Master taught the Fa for about 66 minutes. After the Fa lecture was over, practitioners presented revered Master with flower bouquets to express their respect and gratitude.

Besides listening to Master's Fa lecture, 15 Falun Gong practitioners shared their cultivation experiences regarding studying the Fa well, improving their xinxing, speaking with people about Falun Gong and the persecution, and saving sentient beings. Several practitioners shared how they look within, believe in Master and Fa, do a better job in cooperation and coordination while doing media work, promoting Shen Yun to Western society, and speaking to people in China about Falun Gong and the persecution. They also talked about how to save sentient beings on a larger scale in the current Fa-rectification circumstances. The practitioners' sharing showed their maturity and steadiness, and their sense of responsibility and mission in saving sentient beings.

Mr. Wu from Taiwan shared how Taiwan Dafa disciples continuously and on a large scale spoke with high-ranking government officials after the New Tang Dynasty Television Asia-Pacific branch met with obstacles in its satellite contract renewal with Chunghua Telecom. He said, “In this incident, other than clarifying the truth, there was almost no other objective condition that could be used. After having a thorough exchange and sharing, and forming a united entity, Taiwan Dafa disciples began to clarify the truth to all possible high-ranking government officials, reaching an extent that 'One wouldn't be a high-ranking government official if one had no idea what the NTDTV satellite contract renewal was about.' During the practitioners' truth-clarification, new clues constantly popped up, new doors were opened one after another, and ultimately led to the renewal success.”

Mr. Liu from the U.K. talked about the entire process of applying for a first-class theater for a Shen Yun performance in the U.K. He shared how studying the Fa well, strengthening righteous thoughts and working together played a crucial role. He said that there were many miraculous occurrences during the whole process. Many seemingly impossible things became possible with Dafa disciples' firm belief in Master and the Fa.

Ms. Li from Australia introduced her cultivation experience in working with the local Epoch Times newspaper. She said that after the concept of “a sales team based on cultivation practice” was established, she managed to improve her xinxing, do a better job in cooperation, and maintain righteous thoughts and actions in actual work. Moreover, she made good use of her successful management experiences in other enterprises, and she was able to keep achieving better results in sales.

Ms. Jiang from Hawaii shared that New Tang Dynasty TV was first broadcast as a local channel and became the biggest Chinese TV station in Hawaii. The TV broadcast there has an excellent effect in clarifying the facts about Falun Gong and other issues among local Chinese residents and leads them to have righteous thinking.

Ms. Nunez from Washington DC is the mother of three children. She described how she got rid of various worries in contacting and explaining the facts to government officials in the United States, and the changes she experienced after becoming compassionate to save them from the bottom of heart.

Ms. Yan from Washington DC talked about her experience in advising relatives, friends and other people in China to quit the CCP and its affiliated organizations, in explaining the facts of Falun Gong to tourists at scenic sites and in distributing the English Epoch Times--besides taking care of her grandson. In her talk, one could feel the urgency of saving sentient beings.

The conference concluded at 5:40 p.m. Many participants said that they benefited a lot and would be more diligent.