(Clearwisdom.net) On the evening of July 15, 2011, in front of the Washington Monument in the U.S. Capital, a symbol of freedom and hope, thousands of candles cast a gentle glow. More than 2,500 Falun Gong practitioners from around the world held lighted candles and formed the Chinese characters reading “Falun Dafa is good,” to commemorate fellow practitioners who have died as a result of the Chinese Communist Party's (CCP) persecution of Falun Gong in China. Those practitioners lost their lives for firmly upholding their belief and for safeguarding the principles of Truthfulness-Compassion-Forbearance. The practitioners held the candlelight vigil in Washington DC to expose the twelve-year persecution in China and to call for its end. The event was solemn and moving. 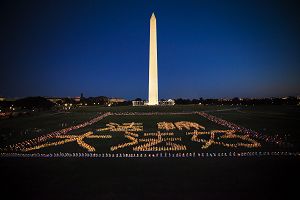 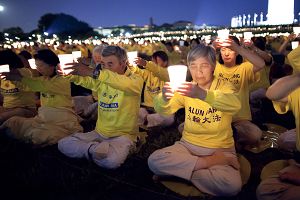 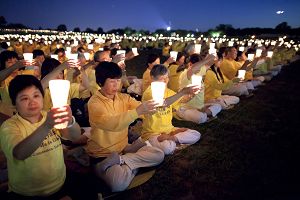 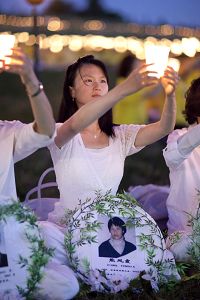 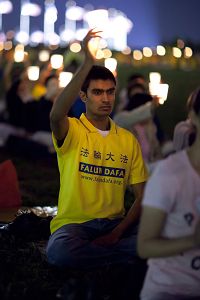 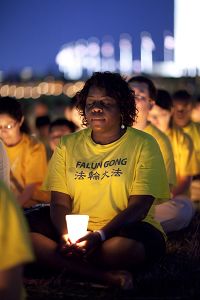 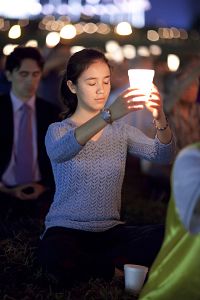 Falun Gong, also known as Falun Dafa, is a traditional Chinese spiritual discipline for mind and body. The practice involves slow, gentle movements and meditation. The principles of Falun Gong are based on Truthfulness-Compassion-Forbearance. The practice was first introduced by Master Li Hongzhi in China in May 1992 and quickly spread by word of mouth throughout China and then beyond. Its beneficial effects in uplifting an individual's physical health, spiritual well-being, and moral character, as well as its positive influence in the community and society as a whole, have been affirmed worldwide.

However, the CCP, which rules China with lies and violence, was unsettled that millions of people would strive to follow the principles of Truthfulness-Compassion-Forbearance. On July 20 1999, the CCP mobilized its entire state machinery and launched a comprehensive and systematic brutal persecution of Falun Gong practitioners. All of a sudden, lies, slanders and defamation overwhelmed the nation. Intense pressure, arbitrary detention, forced labor, and torture devastated an untold number of practitioners. According to figures from the Minghui/Clearwisdom website, as of July 15, 2011, at least 3,428 Falun Gong practitioners are confirmed to have died as a result of the persecution, though that number is likely to be much higher.

Since the start of the persecution, practitioners throughout the world have been speaking out about Falun Gong and exposing the CCP's crimes in a tireless effort to end the persecution.

Every July 20, for twelve years, practitioners from around the world have gathered in Washington DC to hold a series of large-scale activities to expose the persecution and to call for all people to work together to stop the CCP's brutality. Every year, there is a candlelight vigil to commemorate those who have died in China and to call for justice. Over the years, more and more people have expressed their support for Falun Gong's untiring efforts to end the persecution, which demonstrates the hope that righteousness will ultimately triumph over evil.