Practitioners Rally in Washington DC: U.S. Congress Member Declares, “The persecution of Falun Gong must end, and it must end now!” (Photos)

(Clearwisdom.net) Ever since the Chinese Communist Party (CCP) started the persecution of Falun Gong on July 20, 1999, Falun Gong practitioners from around the world have gathered at the U.S. Capitol in Washington DC each July to call for an end to the persecution. This is the 12th year they have held such annual activities. 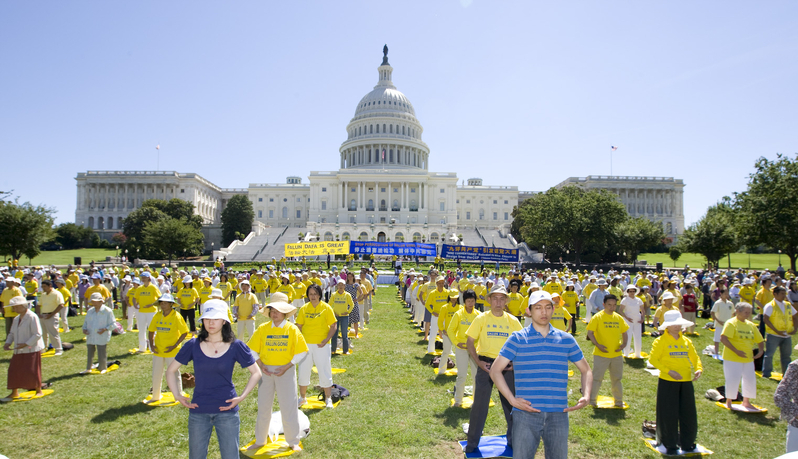 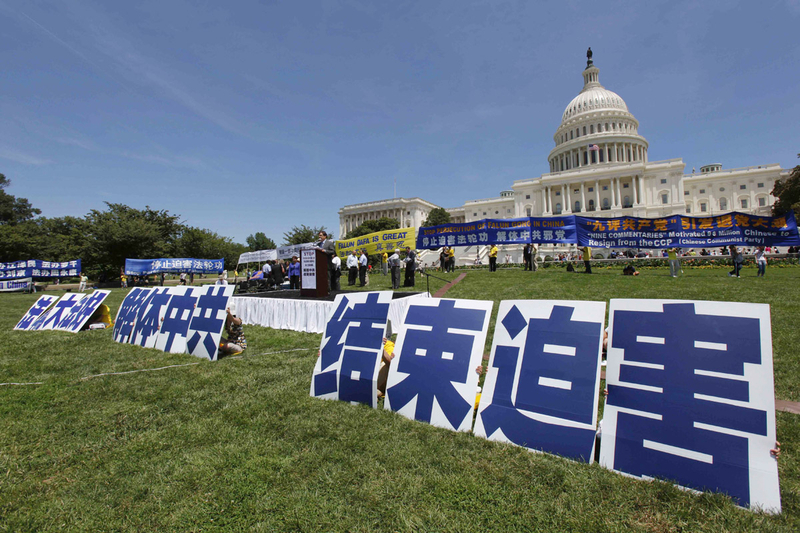 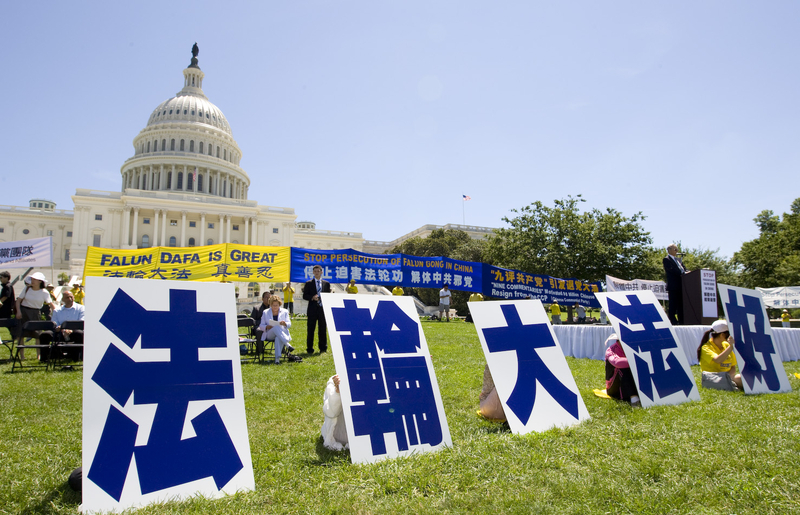 On July 14, 2011, practitioners from around the world once again gathered at the Capitol in Washington DC to continue their efforts to raise people's awareness about the CCP's brutal persecution of Falun Gong and call for its end. A number of Members of the U.S. Congress, NGOs, and representatives from Freedom House and Amnesty International came to express their support, saying that the U.S. government should lead the countries of the world in condemning the persecution. 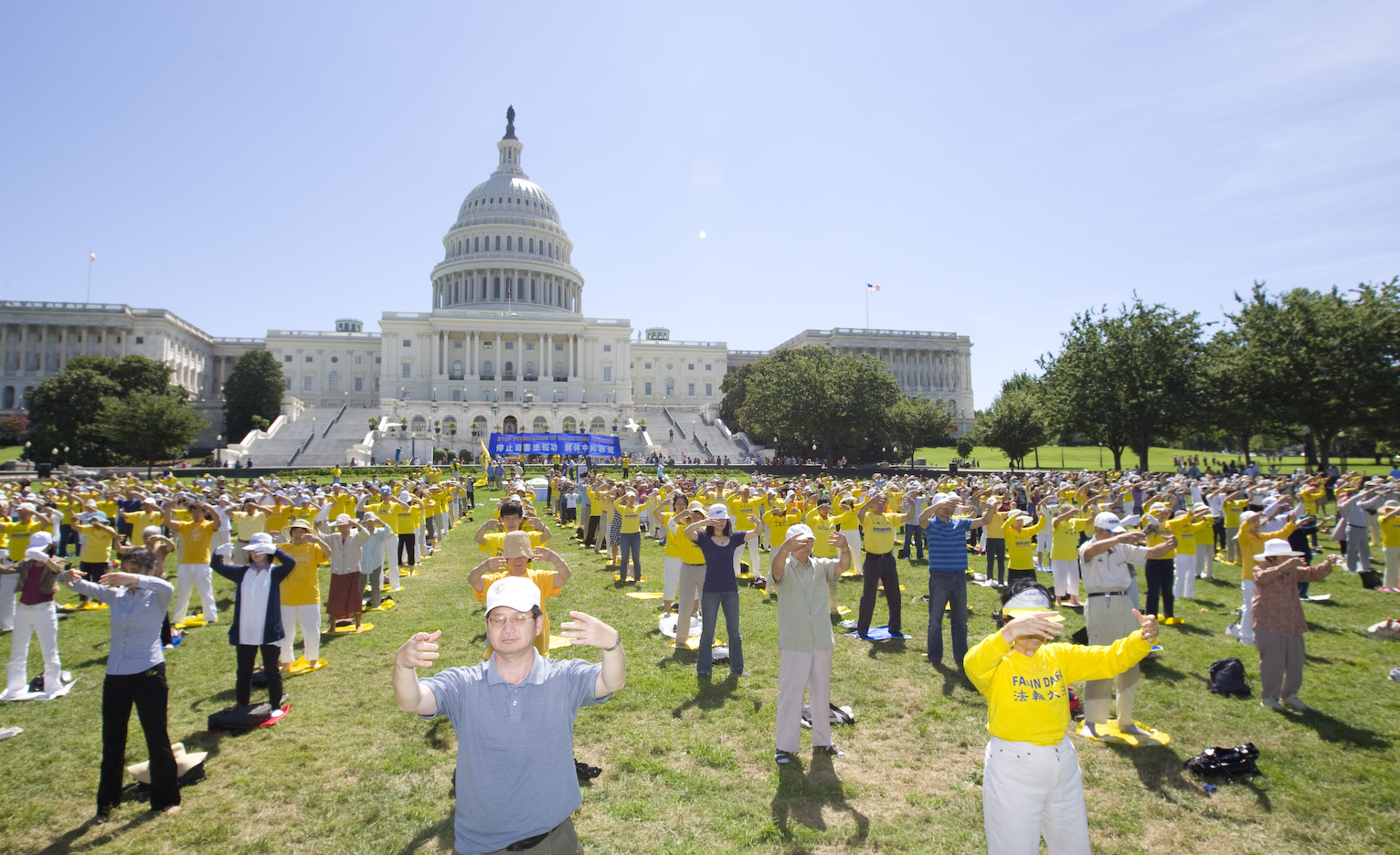 Practitioners from around the world gather at the Capitol Hill, Washington DC to do the exercises on the morning of July 14, 2011, to kick off three days of activities to call for an end to the persecution

Chair of the House Foreign Affairs Committee: The persecution of Falun Gong must end 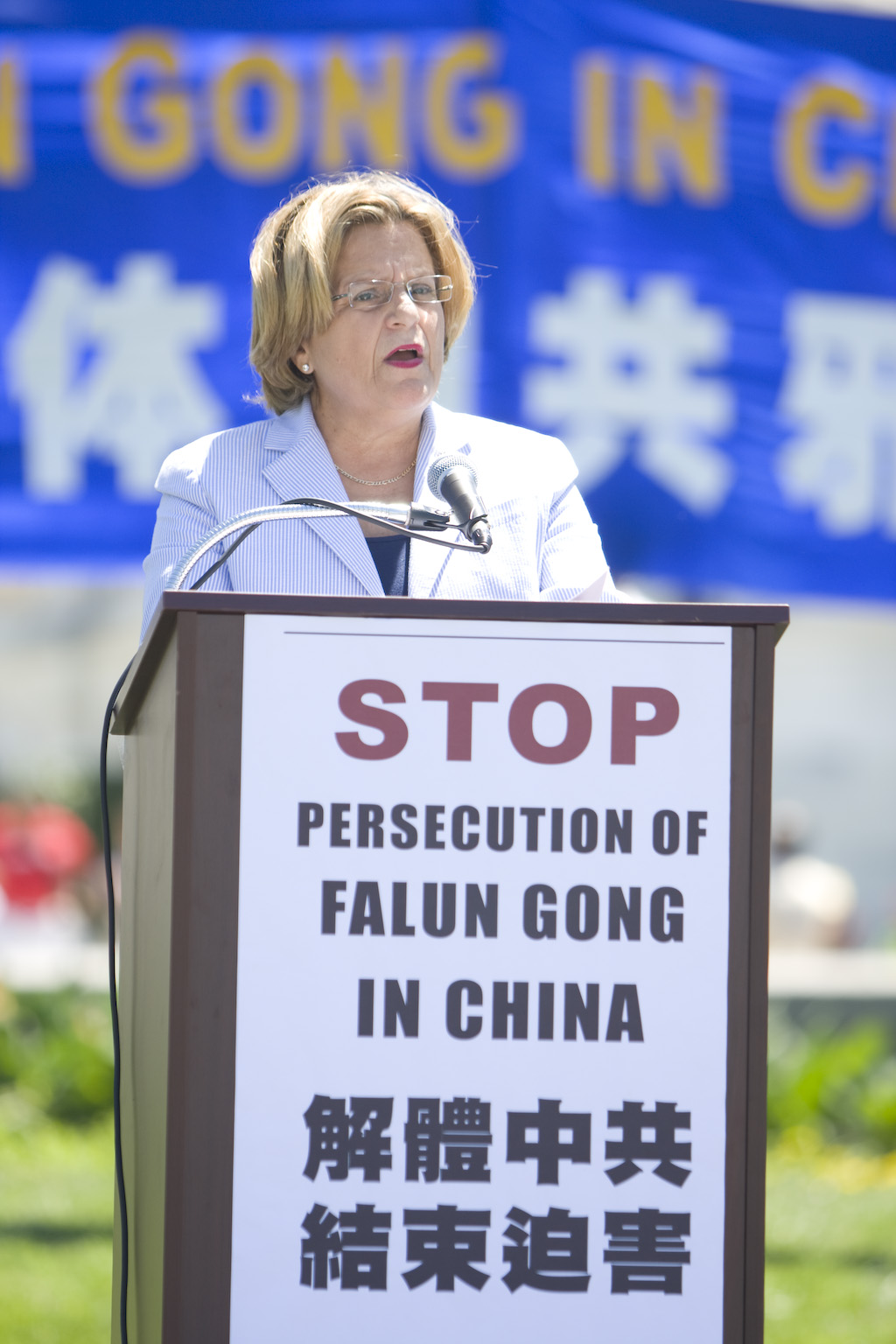 Rep. Ileana Ros-Lehtinen (R-Fla.) stated at the rally, “At least twenty-six practitioners have died due to abuse in custody since the beginning of the year. Several of these victims died after being held in 'brainwashing centers' where torture and application of psychotropic drugs were used to force them to renounce Falun Gong. These latest victims are added to the total recorded number of 3,434 Falun Gong practitioners who have died as a result of various forms of persecution since 1999. Additionally, human rights lawyers like Mr. Gao who have advocated for the rights of Falun Gong and other victims of Chinese repression continue to disappear or be imprisoned. These murders, kidnappings and other egregious human rights abuses should serve as an alarm bell to all persons of conscience throughout the world.”

She stressed, "the persecution of Falun Gong must end, and it must end now!"

Rep. Ileana Ros-Lehtinen stated, “We may have declared victory over world communism prematurely. The iron curtain may be gone, but the bamboo curtain remains. And an unreformed Communist China threatens to dominate not only the Asian region but also other portions of the world beyond.”

Rep. Ros-Lehtinen asked the President and Vice President to speak out for human rights in China, and speak out against the repression of Falun Gong. “America must stand with Falun Gong and all the repressed. This is our Constitutional responsibility; this is our national creed!” 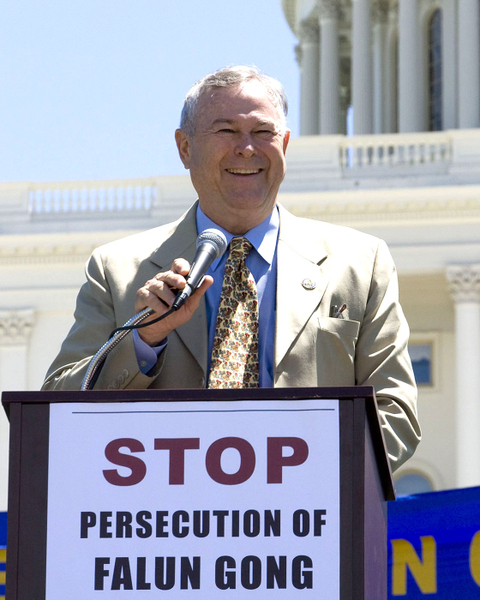 Rep. Dana Rohrabacher (R-CA) also spoke at the rally. He said that Falun Gong practitioners have drawn the attention of the American people to the brutal repression in China, and to the fact that thousands upon thousands of human beings are being murdered, taken away from their families and thrown into jails and to labor camps, and that these things are carried out with the direction of the leadership of the communist party that controls the government of China. “This fact is so important for Americans to understand. If we allow an evil force like that to continue without being challenged, that evil force will some day affect us here,” he said.

Rep. Rohrabacher said, “We, as human beings, must stand together. The good people of this world need to stand together against the type of tyranny, injustice, and the human suffering that has been brought by this dictatorial regime in China.”

Rep. Rohrabacher continued, “Falun Gong represents a movement in China that reflects the traditional values of the people, and the government in China reflects tyranny and injustice and a philosophy that was brought in from Europe. It is about time the people of China direct their own future.”

Falun Gong practitioners then presented an award to Rep. Dana Rohrabacher for his long term support for human rights in China. 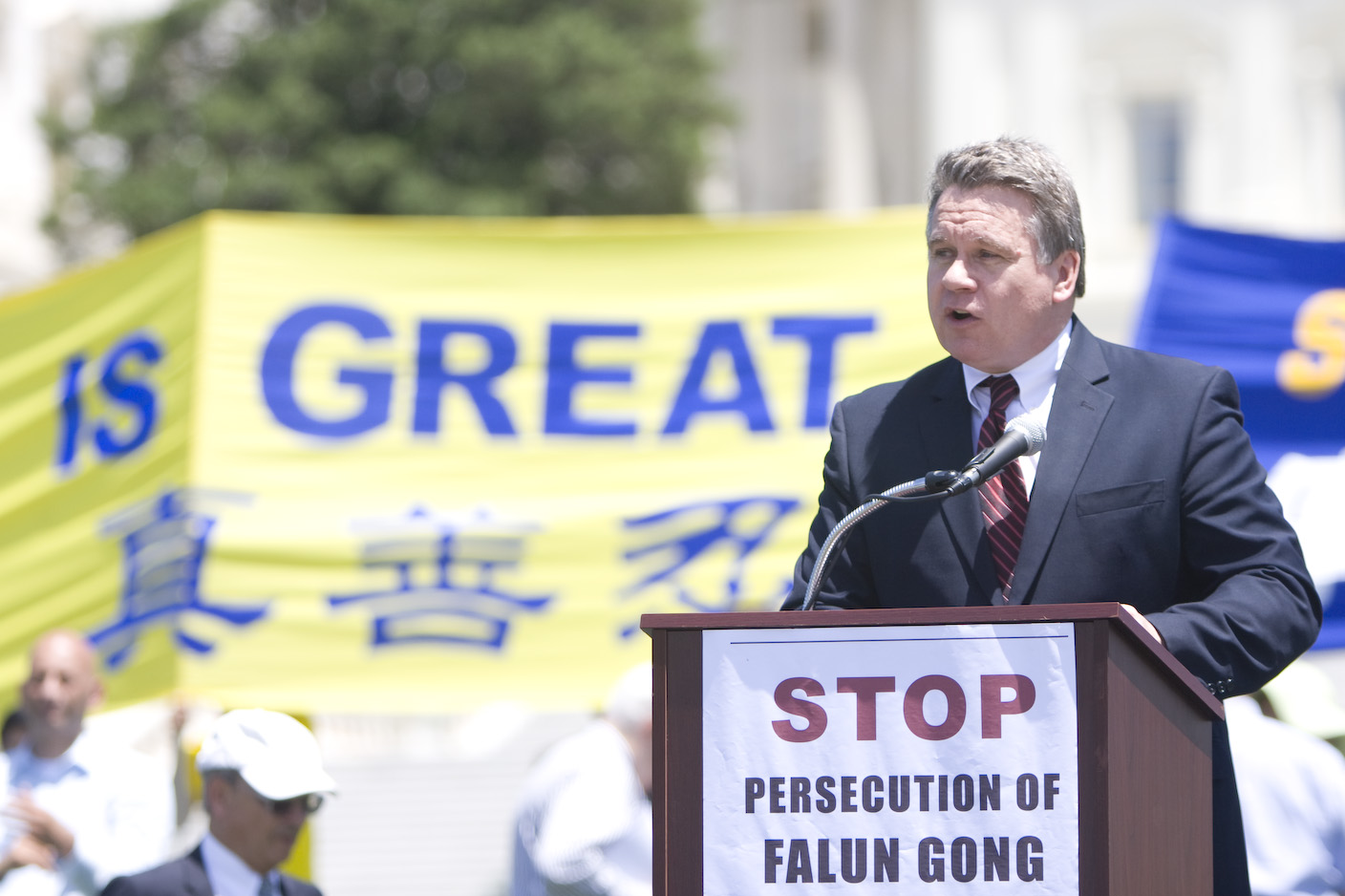 Rep. Chris Smith said that the U.S. President, both parties, and both the Senate and the House of Representatives need to speak out loudly, clearly and persistently for Falun Gong, Christians, Tibetan Buddhists and all other people of faith who have been barbarically persecuted.

He said, “I commit, as chairman of the Human Rights Committee of the House of Representatives, to continue to hold hearings, to promote resolutions, and intend to hold the Chinese government to account.”

Rep. Smith introduced a bill just recently that would deny visas to any Chinese officials engaged in human rights abuses, denying their opportunity to come to the United States.

He concluded, “I know you believe a better day is coming, but it will come sooner rather than later, if we do our part in the congress to speak out, with a clear voice, on behalf of Falun Gong.” 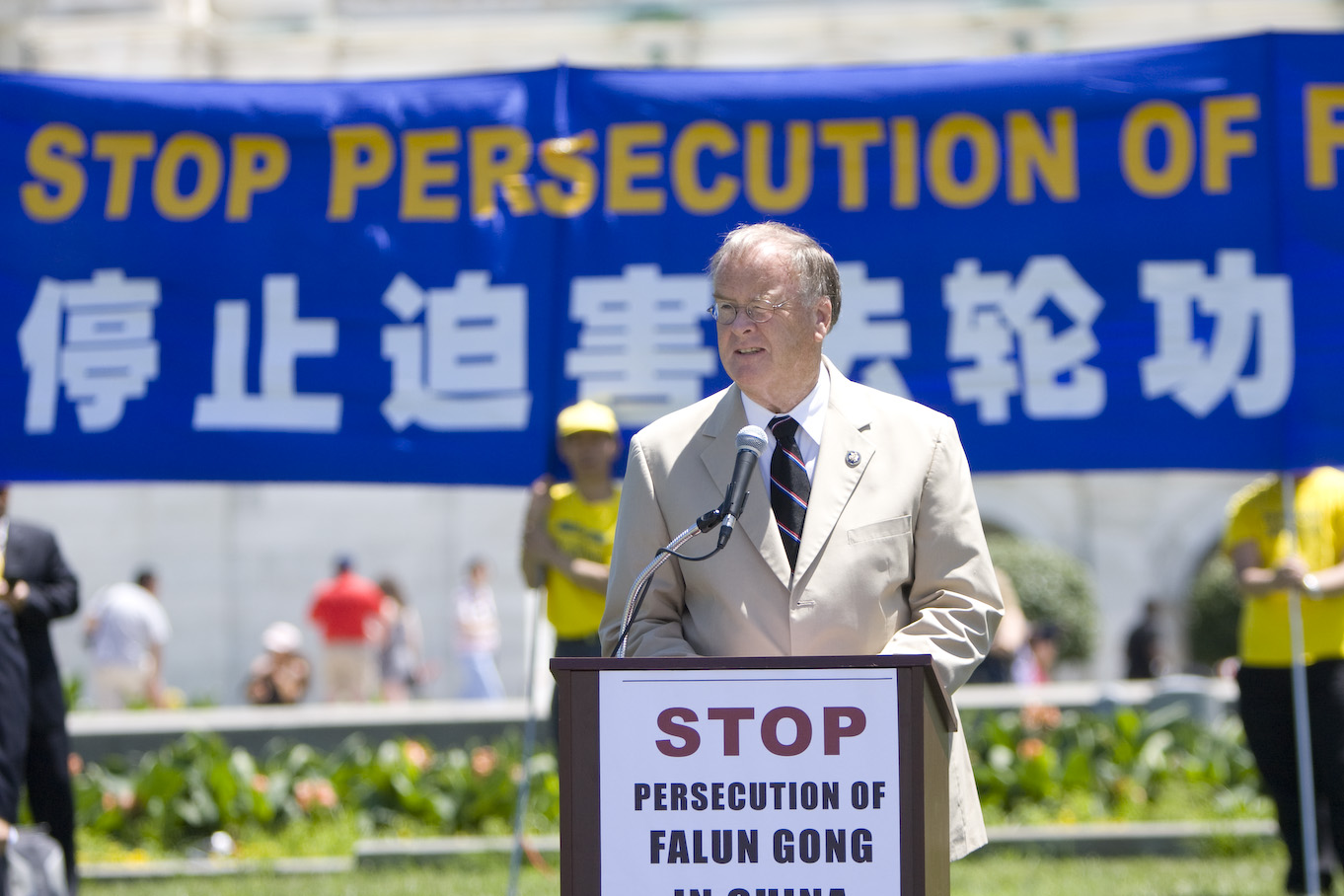 Rep. Sam Farr (CA) said that he has paid attention to the persecution that Falun Gong practitioners are experiencing in China. He said, the building [Capitol Hill] behind you [practitioners sitting in the sun] is a symbol to the world of human rights protection.

He said, “The three basic principles of Falun Gong, Truthfulness, Compassion and Tolerance, are principles of any free world, any free country, and the principles which we as lawmakers try to hold every day as our constitution gives those rights to our citizenry.”

“Human rights violations anywhere should be a cause for concern everywhere for everyone. So it's very important that all of you are gathered here to make your voices heard.”

He said, “Today I hope that your presence here in the United State Capital will be a reminder to the world, that those who speak truthfulness, those who show compassion, and those understand tolerance, are to be honored, not persecuted.”

Rep. Gus Bilirakis: The persecution of Falun Gong is unacceptable in the civilized world 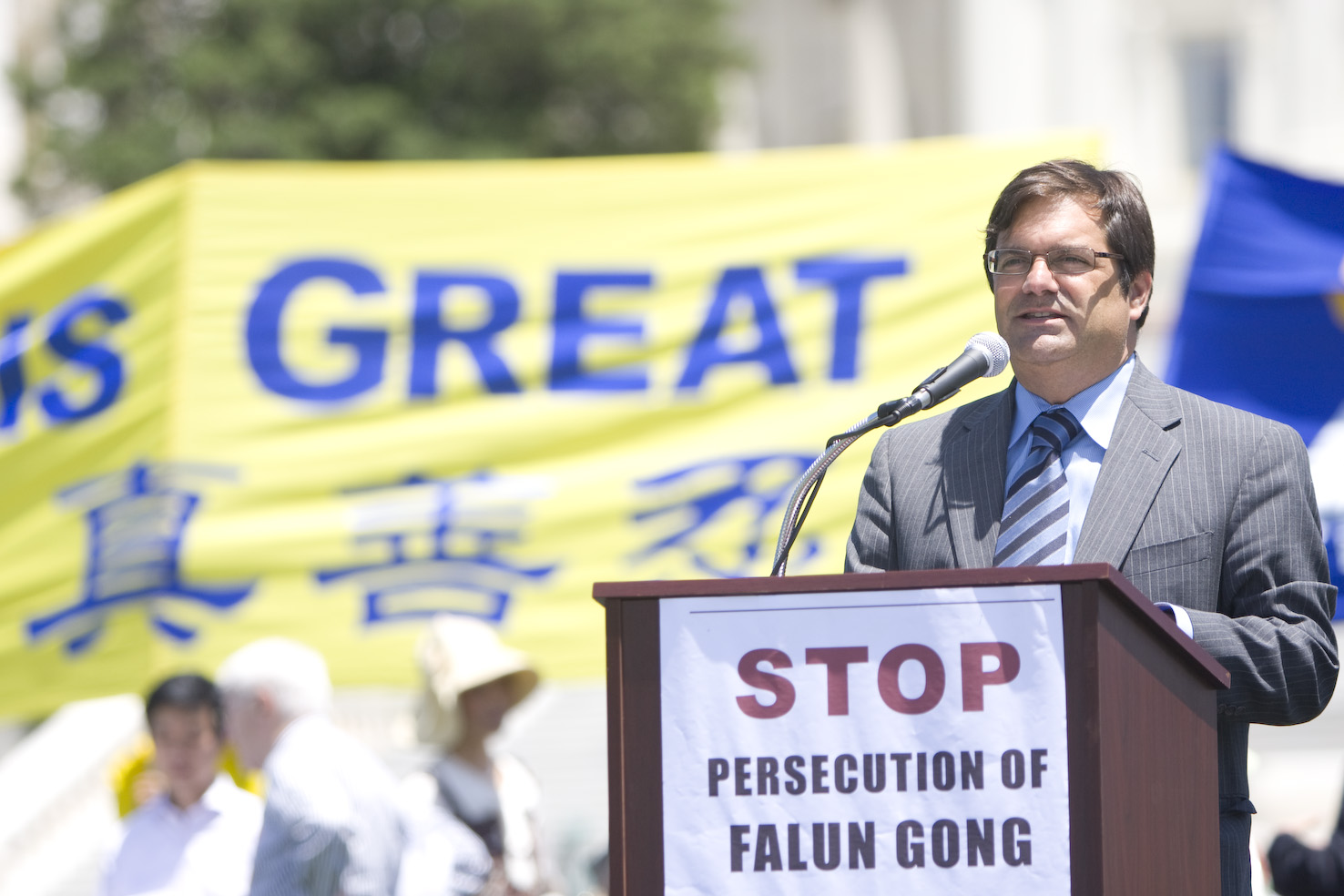 He said, “You are a testament that the millions of victims will not be forgotten. Egregious injustices, such as those suffered by the Falun Gong practitioners and others targeted by the Chinese Communist Party, are unacceptable in a civilized world and must end today.”

“I stand with you and share your principles of truthfulness, compassion and forbearance.”

Deputy Director of Policy and Research of the The United States Commission on International Religious Freedom: “The persecution of Falun Gong is a shame in Chinese history”

Dr. Scott Flipse, deputy director of Policy and Research for the United States Commission on International Religious Freedom stated in his speech, “We are talking about one of the great shames of the last decade--the persecution, the systematic eradication by the Chinese Communist Party, of Falun Gong. At the United States Commission on International Religious Freedom, we have worked for the last ten years, raising publicity about Falun Gong issues in our annual reports with members of congress, and with members of administrations, and also with Chinese officials from both China and here. We will continue to do so, I can promise you that, but it is not enough.”

He said, "I think when history is written, that the systematic torture and eradication of Falun Gong will be seen as a shame in Chinese history. That's the future. What we do right now is to end that shame in the moment. I think we need to continue to ask our administration to speak publicly, and unashamedly about human rights, and religious freedom and persecution of Falun Gong.” 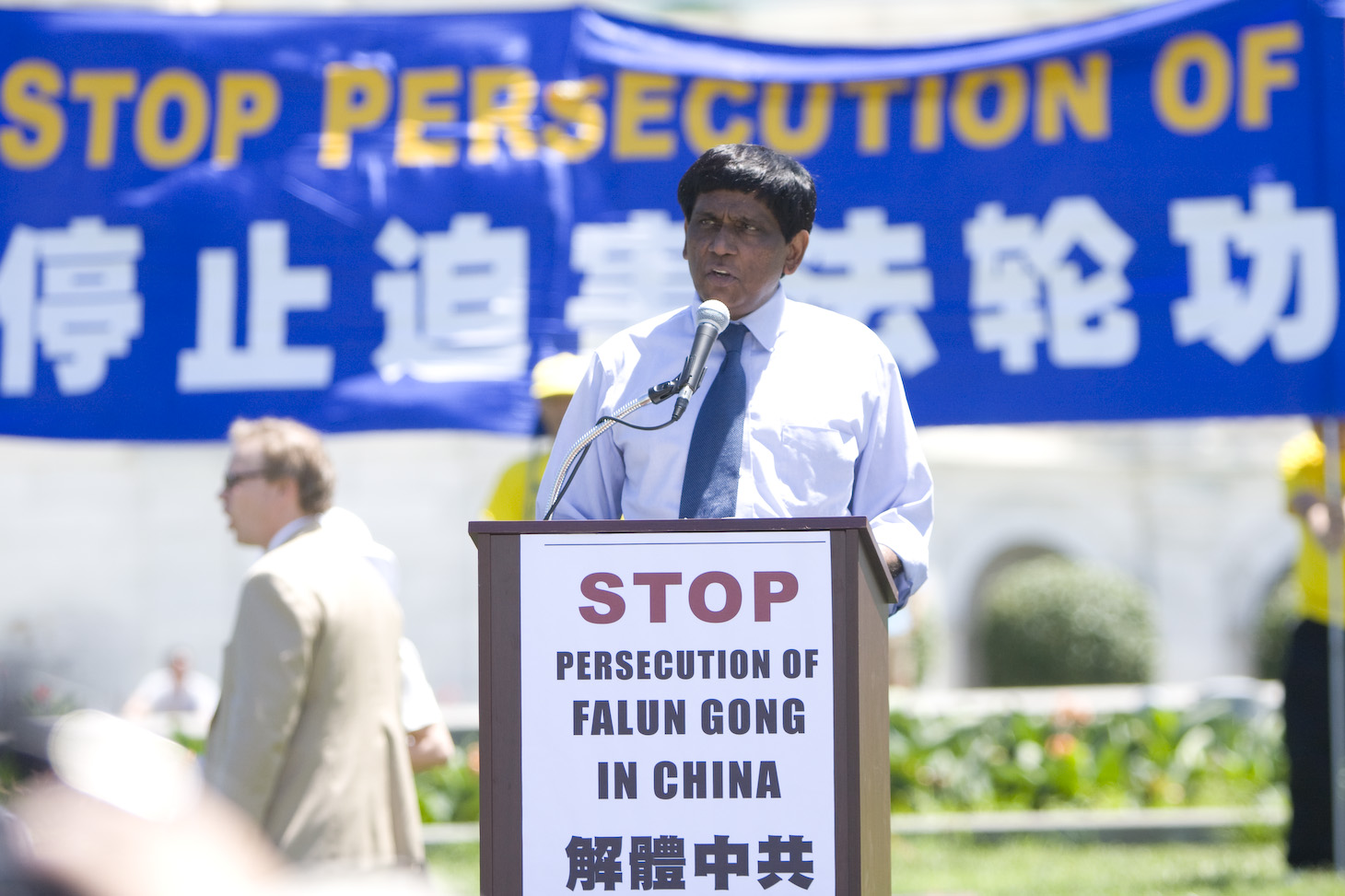 "Over the past twelve years, Falun Gong practitioners and their families have suffered greatly at the hands of the Communist Party, simply for exercising their fundamental rights to freedom of belief and peaceful expression of their views.”

Michael J. Horowitz, director of Hudson Institute's Project for Civil Justice Reform and Project for International Religious Liberty; Faith McDonnell, director of Religious Liberty Programs at the Institute on Religion and Democracy;William Murray, Chairman of the Religious Freedom Coalition, and Dr. Clark Lobenstine, the Executive Director of the InterFaith Conference of Metropolitan Washington, and other guest speakers also expressed their support for Falun Gong and condemned the CCP's persecution.

Many tourists, including Chinese tourists to Capitol Hill listened to the speeches at the rally. One said, “I did not know about Falun Gong until today. The CCP's persecution of Falun Gong is incredible and horrible. I don't know why the Chinese communist regime persecutes Falun Gong. I think there are no grounds.” When he learned that the CCP agents harvest organs from living Falun Gong practitioners, he said, “The persecution must be stopped. I'll go back and get on your website to see what I can do for you. I want to learn more about Falun Gong.”

A group of student interns at the White House passed by the rally, and listened to the speeches carefully. One of them said, “Truthfulness-Compassion-Forbearance does no harm to anybody' on the contrary, it would be great if everybody could follow those principles. The CCP doesn't recognize these values, but persecutes those who believe in them. This is certainly not right. The persecution must end.”