(Clearwisdom.net) Today's news from China includes incidents of persecution that took place in 19 cities or counties in eight provinces. As per this report, 29 practitioners were subjected to mistreatment during their detention, and at least ten practitioners were illegally arrested. 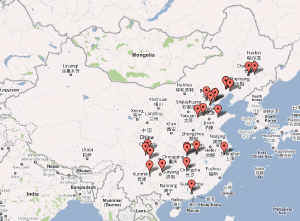 Ms. Zhang Honghui, 36, was listening to Master's Fa-lectures from a MP3 player one March 2011 March evening, when Hou Town Party member Zhang Jianlin and three officers from the Hou Town Police Station harassed her at home. They rummaged through her home and confiscated a copy of Zhuan Falun and the MP3 player she was using. At that time she was already emaciated and unable to take care of herself as a result of being persecuted. She died on May 27.

Mr. Wang Jianguo from Zhongshui Town was arrested on June 11, 2011 as he distributed Shen Yun performance DVDs and spoke with people about Falun Gong. He is still being held in the Weining County Detention Center.

Mr. Dai Gaotang, in his sixties, from Gong'an County, was arrested on the morning of June 23, 2011, as he and a female practitioner spoke with people about Falun Gong in Banzhudang Town. Banzhudang Town Police Station officers took them to the county's detention center and released them that same afternoon.

The next morning, the county's State Security Division deputy head and others came to Mr. Dai's home and deceived him into going to the Jingzhou City Brainwashing Center.

Upon arriving there, Mr. Dai learned that many practitioners had been detained there. The practitioners who refused to comply with the brainwashing were subjected to brutal physical abuse and torture, and were later covertly transferred to the Hubei Province Brainwashing Center.

Mr. Zhao Fuchen from Qinghe County, was arrested at home on the morning of June 29, 2011. County Domestic Security Division and 610 Office agents took him directly to the Xingtai Brainwashing Center.

Ms. Liu Yanqiong, around 45 years old, from Jingzhou City, was arrested at home on the evening of June 23, 2011. Her home was ransacked. She is currently in a brainwashing facility.

Ms. Li Mingxia, employed at the Changchun City No. 1 Automobile Company, was fired from her job because she went to Beijing to appeal for justice for Falun Gong. She has been staying in her older brother's home.

Four officers from the Luyuan District Police Station arrested Ms. Li and another practitioner on the morning of June 30, 2011. The other practitioner was able to escape that same day. Ms. Li's brother's home was ransacked and a computer, a CD-burner and more than 10,000 yuan in cash were confiscated.

Ms. Wang Junhua from Changping was arrested at home on the evening of June 29, 2011, and her home was ransacked. The police confiscated her three computers and printers, many Falun Gong books, and informational materials. The police also arrested her older sister who was released later. Ms. Wang is currently at the Changping Detention Center.

Ms. Peng Xiaoyun's 15-day detention term expired on June 17, 2011. Her family went to the Tangshan Domestic Security Division and the Tangshan Detention Center to take her home that same morning. At around 9: 00 a.m., her family saw officers from the Domestic Security Division driving Ms. Peng away from the detention center. They later learned that the police had taken Ms. Peng to the Kaiping Forced Labor Camp.

Ms. Qiang Suzhen and Ms. Li Xiaojie were also transferred to the Kaiping Forced Labor Camp on the afternoon of June 17, to be held for a year.

Ms. Wang Yuchuan and Mr. Ma Yongsan were suddenly arrested at work on the morning of June 28, 2011, and their homes were ransacked. Ms. Wang was taken to the Kaiping Forced Labor Camp, and Mr. Ma to the Tangshan City Detention Center.

Agents from the Choayang County Domestic Security Division, along with officers from the Liujiazi Police Station headed by Suo Jingdong arrested Mr. Zhu Guotian, Mr. Zhu Ping, Ms. Shi Xiuqing, and Ms. Lu Guifen on the evening of May 23, 2011. The four practitioners' homes were ransacked, and many personal belongings were confiscated. Mr. Zhu Guotian was released because a physical examination disqualified him from being detained. But he was later arrested twice from home and recently arrested for the third time.

Pixian Town 610 Office agents Luo Qinghan and five others ransacked homes of Mr. Wang Engui and Mr. Zheng Qilan on the morning of July 1, 2011, in Shahe Village. They confiscated the two practitioners' Falun Gong books. This group of people then proceeded to try to ransack homes of Mr. Wang Wanjun and Mr. Liu Shouhui, but refrained from doing so because no one was at home.

Mr. Li Shoajie, in his forties, teaches at the Yangchang High School in Kaiyang County. He was arrested on June 17, 2011 as he was distributing information about Falun Gong in Maoyun Township and was taken to the Kaiyang Detention Center that same day.

Ms. Shang Guizhi, 50, lives in Gaocun Village, Gaocun Town, the Wuqing District. About eight people from the Gaocun Town Government harassed her at home on July 20, 1999. The next day, Gaocun Village Party secretary Du Qingru, leading about eight others, confiscated Ms. Shang's Falun Gong books. They took her to a brainwashing facility where she was held for ten days. The village's public security officer Huang Minghai harassed her at home daily following her release.

Gaocun Police Station officer Zheng Zhifeng and about six other officers confiscated Ms. Shang's Falun Gong books and a tape recorder in October 2000, before taking her to the Wuqing District Detention Center for a 15-day term. They released her after she had paid 240 yuan extortion money.

Gaocun Town Police Station officer Liu Deli and about six others ransacked Ms. Shang's home on July 30, 2007. They confiscated Falun Gong books, Master's photo, a television set, an MP3 player, a satellite receiver, a tape recorder and ID card. They took Ms. Shang to the Wuqing District Detention Center and held her there for 15 days before releasing her.

The latest harassment took place on May 16, 2011. Two officers from the Gaocun Town Police Station went to Ms. Shang's home, claiming the need to check something. Gaocun Village Public Security officer Li Qiang and two other officers harassed her at home on June 30. They called for six more officers to come, then confiscated Falun Gong books and informational materials and CDs.

Ms. Tang Xiurong and Ms. Li from Guangzhou City were followed as they distributed information about Falun Gong. The two practitioners went missing on June 16, 2011. Their whereabouts are unknown.

Shuangfeng County 610 Office agents also arrested Mr. Li's daughter Ms. Li Yuying, in her thirties, and practitioner Ms. Xiong Qingqiu, in her fifties, on April 29. The two practitioners are still being held in the Shuangfeng County Detention Center. Their families are forbidden from visiting them.

Mr. Guo Qinghua, 73, is executive director of the Datang Retirement Association in Pujiang County, and director of the Chinese Association of Painters and Calligraphers. Mr. Guo has been subjected to persecution and harassment numerous times since the persecution began on July 20, 1999. He was arrested and taken to the Datang Police Station and the town government on July 20, 1999, and forced to attend a brainwashing session for several days.

Mr. Guo and other practitioners were arrested again in late September 2001, and taken to the Datang Police Station.

Over ten police officers suddenly broke into Mr. Guo's home on the afternoon of October 18, 2009, and took him to the Qionglai City Domestic Security Division office. He was released that same evening.

Ms. Zheng Xiangqin, 60, a retired employee from the Jilin City Train Section, has been subjected to five arrests, three detentions, and one forced labor stay with a 15- month term over the past ten-plus years. She was also forced to pay several thousand yuan in extortion money. Ms. Zheng was incarcerated in a brainwashing facility for nearly one month in March 2011.