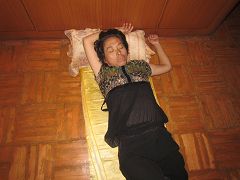 Photo of Ms. Cui Yutao after suffering a mental collapse in police custody

On July 1, 2011, police station officials contacted Ms. Cui's family and told them to go to the detention center and take her home. When they saw Ms. Cui, she appeared to be on the verge of death and exhibited severe symptoms of a mental breakdown. She has not recovered since returning home.

Ms. Cui has been arrested many times in the past and was subjected to beatings and force-feedings. Her symptoms are so severe after the recent arrest, her family is worried she may not survive.

“Dafa Practitioner Ms. Shi Meiying from Zhejiang Province Dies as a Result of the Persecution”