Germany: Practitioners Call for Bringing the Perpetrators of the Persecution to Justice During Chinese Premier Wen Jiabao's Visit (Photos)

(Clearwisdom.net) On June 27 and 28, 2011, Chinese Premier Wen Jiabao visited Germany. On the evening of his arrival, Premier Wen met with German Chancellor Angela Merkel in Liebermann-Villa.

Four Chinese in dark clothes talked with police officers for quite a while and pointed at the banners. Since the CCP initiated the persecution of Falun Gong, Chinese officials have often made irrational demands to the German police when high level Chinese officials visit Germany, such as blocking Falun Gong practitioners’ banners, making the group of practitioner move, and even objecting to the practitioners wearing the color yellow. But this time, the German police did not take any action. When Wen’s motorcade passed by the protesters, the banners could be seen clearly from the cars. 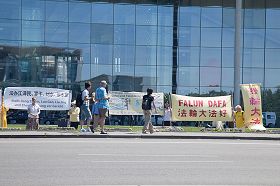 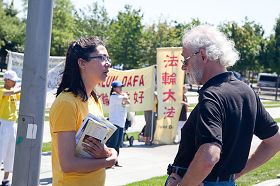 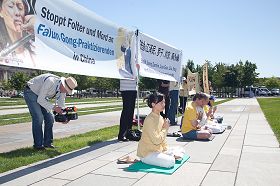 On June 28, the practitioners continued their protest in front of the German Chancellor’s office.

Over 50,000 signatures presented to the German Chancellor 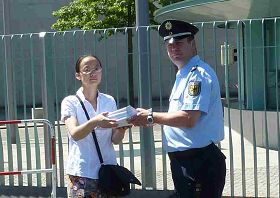 She said that most of the signatures were collected during local weekend events to raise awareness about the persecution. Some of the forms had been mailed to practitioners by supporters. For example, a doctor sent a signed form with an attached letter, encouraging the practitioners to keep up their efforts to stop the persecution. 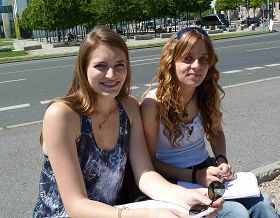 Tatjana Gridnev and Hannah Isenbügel are undergraduate students at Humboldt University. They had come to the site during Wen's visit hoping to find a topic for a school assignment. Thus, they condcuted interviews with practitioners. Hannah said they had read a lot about China. She said, “It's inconceivable to live without freedom of belief and freedom of speech.”

German man: This is a crime! 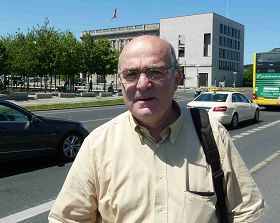 Wolfgang Schroter, who lived in the former East Germany, said, “This (persecution of Falun Gong) is a crime.”

Wolfgang Schroter had lived in the former East Germany for most of his life. He works near the Chinese Embassy in Berlin. For nearly ten years, Falun Gong practitioners have kept protesting in front of the Chinese Embassy. Thus, Mr. Schroter has learned about the persecution of Falun Gong. He said, “This is a crime! It is violating the constitution.” He said the Communist Party in the former East Germany also persecuted religious people and did not allow people to protest. He said that wherever the Communist Party is, it restricts people’s freedom.

A Falun Gong practitioner who suffered torture in China: I am speaking out for my fellow practitioners in China

Practitioner Jufeng Guo, who was tortured in China, protests the CCP’s persecution in front of the German Parliament

Practitioner Jufeng Guo came to Germany in 2008 . He drove four hours to participate in the protest during Wen's visit. Mr. Guo was arrested four times for practicing Falun Gong in China. He was imprisoned in three forced labor camps and tortured with at least 30 different means of torture and mental abuse.

He had tears in his eyes when he shared that three practitioners in his hometown were recently arrested and 9 others he knew well were tortured to death. He said, “They could not speak out in China. I can speak for them here. When I was in China, I went to appeal on Tiananmen Square. I could not meet with Chinese officials, but here I can express my views. I hope Wen Jiabao can learn the facts and make the right choice based on his conscience and stop the persecution of Falun Gong.”

A police officer impressed by the protest

A German police officer on duty in front of the Chancellor’s office said to a practitioner at the event, “Your protest will stay in my memory. The power of such a peaceful protest is far bigger than a noisy one. I believe that everyone seeing it would have such a feeling.”