(Clearwisdom.net) May 13 was World Falun Dafa Day. Political dignitaries from around the globe, including the Americas, Australia, and Europe, issued close to 100 proclamations and letters of greeting to congratulate practitioners on this joyous event. 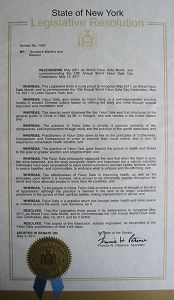 BY: Senators Martins and Maziarz

WHEREAS, This Legislative Body is justly proud to recognize May 2011 as World Falun Dafa Month, and to commemorate the 12th Annual World Falun Dafa Day Celebration, May 13, 2011, in Union Square Park; and

WHEREAS, This special event observes the day Falun Dafa was first introduced to the general public in China in 1992 by Mr. Li Hongzhi who now resides in the United States;

WHEREAS, The practice of Falun Dafa is simple; it consists primarily of two components - self-improvement through study and the practice of five gentle exercises; and

WHEREAS, The Falun Dafa philosophy espouses the idea that when the heart is pure, the mind balanced, and the body energized, health and happiness are a natural outcome; individuals have been empowered to leave behind addictions and bad habits; families live in peace together; and communities embrace what is virtuous and life-affirming; and

WHEREAS, The effectiveness of Falun Dafa in improving health as well as the principles upon which it is founded have proven to be immensely popular throughout the world and have attracted people in more than 40 countries; and

WHEREAS, To the people of China, Falun Dafa provides a source of strength in the face of oppression; though the practice is banned in the land of its origin, practitioners persevere in the pursuit of their spiritual beliefs, risking imprisonment or worse; and

WHEREAS, Falun Dafa is a practice that has brought better health and inner peace to millions around the world; now, therefore, be it

RESOLVED, That this Legislative Body pause in its deliberations to recognize May 2011 as World Falun Dafa Month, and to commemorate the 12th Annual World Falun Dafa Day Celebration, May 13, 2011; and be it further

RESOLVED, That copies of this Resolution, suitably enlarged, be transmitted to the Falun Dafa practitioners of New York State.

ADOPTED IN SENATE ON By order of the Senate,
May 3, 2011 (Signature)
Francis W. Patience, Secretary

Phrases found in this resolution that resonated throughout the other proclamations include “Truthfulness, Compassion and Forbearance,” “healing and fitness,” “improvement of moral nature,” “immensely popular throughout the world,” “strength in the face of oppression,” and “commemoration.” Those phrases are essential contents in the proclamations from political dignitaries around the world, representing their respective citizenry and voicing their support for Falun Dafa.

We would like to briefly elaborate on these phrases to explain the facts of Falun Dafa. 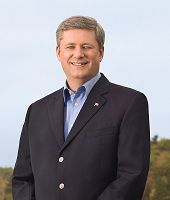 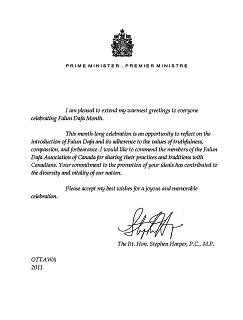 Canadian Prime Minister Stephen Harper has sent letters of greeting recognizing Falun Dafa Month for the past six years. In this year's letter he wrote, “This month-long celebration is an opportunity to reflect on the introduction of Falun Dafa and its adherence to the values of Truthfulness, Compassion and Forbearance…Please accept my best wishes for a joyous and memorable celebration.” 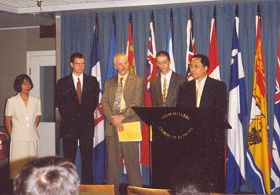 Mr. Li Xun spoke at a press conference at the Canadian Parliament

Mr. Li Xun graduated from Tsinghua University in 1986 with a bachelor’s degree in Computer Science and later received his Master’s Degree in the same field from the University of British Columbia. He started working for the communications giant Nortel as an engineer in 1992 and began practicing Falun Dafa in 1995, the same year the Falun Dafa Association was registered in Canada. Prior to that he had witnessed his wife's miraculous recovery from severe injuries sustained in a car accident, so he participated in the practitioners’ Fa-study and experience sharing in Toronto. Recalling that special time, he said, “I saw people from all walks of life, and it just felt so pure. Everyone had a moving story, and they were always considerate of others. They acted in accordance with Truthfulness-Compassion-Forbearance and exhibited nobility of character without any pretense. At a time when everyone else is fighting for self-interest, these people were giving it up, to work on selflessness. Through them I saw the magnificence of Falun Dafa, and it made me want to practice cultivation.”

After returning to Ottawa, Mr. Li Xun read the main book, Zhuan Falun, three times within one week and immersed himself in other Falun Dafa books. He said he found the answers to many questions about life and the universe. He was elated with the kind of joy that springs from the depths of one’s soul upon finding the Truth. His mother also started to practice when she saw the difference it made in the lives of her son and daughter-in-law. Li Xun, his family, and other practitioners established several practice sites in Ottawa in 1998 so others could benefit.

He said, “Falun Dafa and its principles of Truthfulness-Compassion-Forbearance guide people on the path to return to their true selves. Dafa has spread to more than 100 countries and regions, which attests to Dafa’s appeal and mighty virtue, and Dafa will also bring a bright future for mankind.”

Mr. Li is one of about 100 million practitioners worldwide. Their stories are a testament Dafa’s power in bringing about moral and physical improvement as well a profound impact on society.

The Second Phrase: Healing and Fitness

Two recently-published articles on Clearwisdom.net again demonstrate Dafa’s incredible healing powers that were mentioned in all the proclamations and greeting letters.

The first is written by a coal miner who was disabled due to his job but recovered after he started practice Dafa in May 2007. Here is his story.

“A cart fractured my left leg during underground mining in June 2006. I was hospitalized for a month. My broken bones were set, and four six-inch long steel rods were inserted into the bones. Following the surgery the doctor told me I was disabled, and that even if I recovered from the injury I would no longer be able to work in a coal mine. I recuperated for a year after I left the hospital and had to use crutches to walk.

“During my time recuperating, my sister, who is a Dafa practitioner, came to visit me. She was very sad when she saw my situation. My injured leg was purple and very badly swollen. Blood and tissue fluid leaked from where the steel rods were inserted. I was able to walk only when my daughter helped me. With her help I started practicing Dafa that day. I read the book Zhuan Falun. It is such a great book, and I made a firm decision to cultivate to the end.

“My sister taught me the exercises. I could hardly stand, so I leaned against a wall and practiced the exercises. A miracle happened! I stopped using one of the crutches seven days later, and the other one two weeks later. I could walk by myself. One month later I was able to ride a bicycle. Practicing Dafa is really magical. Not only is my leg healed, but my old illnesses, including severe heart disease and vertigo, have also disappeared.

“Within just one month I went from being disabled and needing two crutches to walk to becoming healthy and normal. Ten months later I went back to work at the coal mine. My case is unprecedented and record-breaking in the history of the Bureau of Mines. It is a rare miracle.”

The second article is entitled “A Leukemia Patient Gets a Second Chance at Life.” It is about a young lady named Jinfeng who was diagnosed with leukemia when she was 20 years old, and who recovered fully after practicing Falun Gong. The author, a relative of Jinfeng, told us the story.

“Jinfeng, my 20-year-old niece, was diagnosed with leukemia in the summer of 2006. I had a copy of Minghui Weekly that happened to carry an article titled, “A Leukemia Patient Obtained a New Life.” I decided that I should travel to Heilongjiang Province to see Jinfeng. She had completed her last chemotherapy session. Nearly all of her hair had fallen out, and she had to use oxygen to help her breathe. The doctors didn't want her to get tired or cold, so she wore a pair of thick pants and had a blanket wrapped around her. She was also dependent on others to take care of her every need. Her family had already borrowed almost 60,000 yuan to pay her medical fees and couldn't afford to borrow any more money. The doctors told them that they couldn't guarantee a full recovery, even if they spent 600,000 yuan on a bone marrow transplant.

“When I showed them the article in Minghui Weekly, my father-in-law told Jinfeng that she should try the exercises. I told her, “Falun Dafa is a cultivation practice of the mind and body. When you cultivate, Master can purify your body.” I told her that if she got tired she should ask Master in her mind to strengthen her. We did the exercises together each day.

“Within a week of doing the exercises, Jinfeng was able to do some light work in the kitchen, helping her father chop vegetables. She was also able to eat more, and gradually she became physically stronger. We did the exercises together for about two weeks before I returned home, as she said that she would be able to continue doing the exercises by herself. Not long after, she called me and said she had fully recovered from her illness. Many of her family members and friends witnessed this miracle.”

In 1998, the National Sports Commission in China organized medical researchers in Beijing, Wuhan, Dalian, and Guangdong Province to conduct five surveys of over 35 thousand Falun Gong practitioners. The survey results indicated that the overall effectiveness of Falun Gong practice in healing illnesses in those areas exceeded 98%. The full and basic recovery rate exceeded 70%. The mental and spiritual conditions of those surveyed were also greatly improved. The survey results of Falun Gong's healing effects in North America in 1999 and in Taiwan in 2002 were the same as those in China in 1998.

(1) The effectiveness of Falun Gong practice is demonstrated by the 70% complete and basic recovery rate among Falun Gong practitioners who previously suffered from illnesses, with the overall effective rate reaching over 98.0%.

(3) Falun Gong practice has been shown to exert a positive impact on behavior and lifestyle.

(4) Most Falun Gong practitioners experienced rapid health improvement after they started cultivation. The speed and effectiveness are commonly described as "amazing."