(Clearwisdom.net) Mr. Wang Yongming, 45, is a Falun Gong practitioner from the Beidao District, Tianshui City, Gansu Province. After he began to practice Falun Gong in September 1996, all his illnesses, including appendicitis and gastritis, went away without a trace. As an engineer at the Beidao District Telecommunication Bureau, he used to be obsessed with material gain and fame, and complained about everything. The practice of Falun Gong, however, made him a better person. He not only was able to get along really well with his supervisors and colleagues, but also had a much more harmonious family.

Since the Communist regime started its persecution of Falun Gong on July 20, 1999, Mr. Wang has been illegally arrested and detained many times. His most recent sentence was 11 years in December 2001. He suffered tremendously at the Tianshui Prison. After he was finally released on medical parole in February 2010, Beidao District Police Department agents still constantly harassed him.

When Mr. Wang and his wife Li Cuihong went to the Gansu Province Government Compound to appeal on July 22, 1999, they were arrested. Along with other practitioners who also went to appeal, the couple was taken to the Qilihe District Stadium in the afternoon. The police transferred all the practitioners to their respective local districts later that day. There were more than twenty practitioners from Beidao District, and all of them, including Mr. Wang, his wife, Mr. Li Yikui and his wife and son, were sent to the Beidao District Police Department, where they were handcuffed to the stairway railings for a whole night. Mr. Li suffered at the hands of Beidao District Political Security Division head Zhou Jizu, who handcuffed him behind the back and led him to a police vehicle before departing for the police department. The next day Mr. Wang, Mr. Li and another practitioner were transferred to a different location for one more week of detention, with Mr. Li being sent to the Daonan Police Station and the other two men to the Qiaonan Police Station.

Mr. Wang, his wife Li Cuihong, and Ms. Cheng Guilan (who was later tortured to death) went to Beijing together to appeal on January 4, 2000. Ms. Cheng was arrested in Tiananmen Square the next day. While practicing the Falun Gong exercises in Tiananmen Square on January 9, Mr. Wang and his wife were arrested and taken to the Qianmen Police Station. The couple was next sent to the Tianshui Liaison Office in Beijing, whose staff later escorted them onto a Tianshui-bound train. As soon as they got off the train, they were met by Beidao District Telecommunication Bureau deputy head Ma Aimin and Political Security Section chief Zhang Quanyou, who immediately took them to the Beidao District Police Department.

After being held in the Beidao Detention Center for one month, Mr. Wang was sentenced to one year of forced labor on March 12, 2000 and sent to the Pingantai Labor Camp. The guards forced him to do hard labor every day. After having to coat a wall with corrosive lime without any protection, his fingers began to fester and rot.

Mr. Wang was sent to the Beidao District Drug Rehabilitation Center, in fact a brainwashing center, in March 2001. One day during his three-month detention, he and a few other male practitioners tried to stop a policeman surnamed Yan from beating a female practitioner caught doing the Falun Gong exercises. As revenge, another policeman surnamed Pei and several guards picked him up and dropped him from a nearly 6.6-foot-high staircase. They next handcuffed and beat him savagely with rubber clubs inside an office. Directed by the center head Zhu Wanmin, the gang then handcuffed him to a basketball hoop and left him dangling for more than one hour.

Qincheng District Police Department chief Shi Juping led a group of subordinates and arrested Mr. Wang from his older sister’s home on December 22, 2001. While incarcerated at the Beidao District Police Department, Qincheng District Court officials sentenced him to 11 years of imprisonment. The police sent him to Lanzhou Prison in March 2003. He was forced to peel garlic every day. As soon as he refused to perform hard labor, the guards hung him up and shocked him with electric batons.

Mr. Wang was transferred to Tianshui Prison in July 2003, where he was kept at Division Four, a place normally reserved for inmates on death row or serving life sentences. The detainees in this division had to do the filthiest and hardest jobs. According to veteran inmates, about a dozen criminals died in one year when Jing Chang was the division head.

Every division had its own cafeteria then, and Division Four purchased sacks of flour past their expiration dates. The inmates assigned to cook said, “We had to use hammers to break open the big chunks of flour and then sift it before making steamed buns. The buns had a suffocating smell when served hot, so detainees had to wait for them to cool down. When we tossed leftover buns to the pigs, even the animals turned away.” One detainee was sick and didn’t have any strength to work, but the guards claimed he was faking and sprayed him with cold water. He died just a few days later. Mr. Wang witnessed a similar incident. The guards forced an ill inmate to keep working until he couldn’t even climb into his bed. They then laid him down in a TV room on the third floor. He died the next day.

One day in December 2003, the prison officials gathered all of the detainees for an intensive brainwashing session. When Mr. Wang refused to listen to former education section chief Wei Junming attack Falun Gong and its founder at the meeting, team leader Wen Yanming stopped him from leaving the room. In no time guard Liu Jiangtao rushed at him and shocked him with an electric baton. The guards knocked Mr. Wang over and dragged him to a downstairs office, where they kept shocking him with three or four electric batons at the same time.

The guards forced detained practitioners and other inmates to weave rugs every day. The entire workshop was filled with fibers from the rugs, yet there were no safety measures. Everyone had a quota to finish; those who failed were punished with beatings, solitary confinement or even had their term-reducing points deducted. A lot of people developed pleurisy, pneumonia, or other respiratory problems.

One day the guards put Mr. Wang in shackles. Zhang Yanming yanked the shackles hard, causing him to fall to the ground. Around five people came to shock him all over with electric batons. Guard Liu Jiangtao even inserted his baton into Mr. Wang’s mouth and didn’t stop until it ran out of charge.

That night the guards incited criminal detainees to beat Mr. Wang. An inmate named Wang Haoshai kicked his handcuffs so hard that it cut deeply into his flesh. The same criminal also slammed him into a wall. Wen Xiaojie punched him in the stomach, and he could barely breathe. Zhao Fenglin forced him to stand upright without leaning against a wall. Whenever he closed his eyes from fatigue, Zhao poked him.

The guards shackled Mr. Wang again in September 2005 and ordered him to walk back and forth between his confinement cell and their office. Every step of the 100-foot-long path caused excruciating pain. The flesh on his legs was raw after rubbing against the shackles. Scars formed over the wounds, only to be torn open the next day. To make him suffer even more, the guards ordered detainees Zhang Shouyi, Song Jianghong, and Qing Wangdi to grab the shackles and drag him to the office. A piece of skin on his head was torn off as he was being dragged on ground. At night the guards had him sleep on the cold concrete floor without giving him any covers. As if that were not enough, they intentionally wet-mopped the floor and left the door and windows wide open. 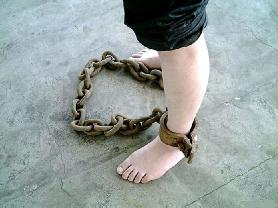 Mr. Wang went on a persecution protest hunger strike in 2005. The guards ordered seven detainees to immobilize him so that he couldn’t move at all. As a result, the joints in his right knee were dislocated. Even today it hurts a lot when he walks long distances. He was force-fed and also brutally beaten that day. Detainee Zhang Shouyi whipped him with a bamboo stick, and Song Hongjiang poked his back with fingers.

After suffering more than six years of torment at the Tianshui Prison, Mr. Wang was released on medical parole in February 2010. Beidao District Police Department agents still keep harassing him at home by calling his family to see if he is still in.

People involved in the persecution of Wang Yongming:

“Miraculous Recovery from a Severe Fracture”