The Virtue of Emperor Taizong (Image)

(Clearwisdom.net) In the second year of the Zhen Guan era, there was a plague of locusts near the capital city Chang An. When Emperor Taizong saw the locusts while inspecting crops grown in the imperial gardens, he picked up a few and said, “People live on crops, but you consume them to harm the people. If the people have done anything wrong, I should be responsible for it. If you understand this, then stop harming the masses of people. You can feed on my heart.” With these words, he was going to swallow the locusts. When the court officials saw this, they immediately said, “Please don’t do this. You may get sick.” Emperor Taizong said, “I was hoping that the disaster could be shifted to me. Why would I be afraid of getting sick?” He then gulped down the locusts. From then on, during his reign, there was never another plague of locusts. (From Zhen Guan Zheng Yao – Farming No. 13) 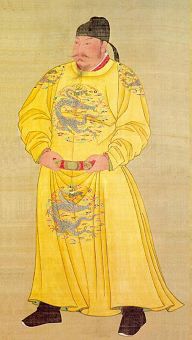 In August of the second year of the era of Zhen Guan, Emperor Taizong came to the court to read through the cases of injustice that people had suffered. Because there were no large issues to deal with at the time, Emperor Taizong decided to reside in the Western Palace. The court officials presented a memorial to him that said, “According to the protocols, the emperor could live in a cool and dry pavilion by the waterside in summer. Right now, the summer heat is still evident and the wet autumn season has just arrived. The foundation of the palace is rather low; so it is very damp inside the palace. We respectfully ask Your Majesty to issue an imperial decree to build a pavilion by the waterside for Your Majesty to live in summer.”

Emperor Taizong wrote in reply, “I do have a health problem, and when it is wet and cold, I suffer pain in my joints. It is true that it is not suitable for me to live in the palace, which is low in location and damp inside. However, if I agree to your suggestion, it would cost a lot of money. In the past, when Emperor Wen of the Han Dynasty was about to build the Lu Pavilion, he thought that it would cost ten households’ wealth to build it, so he decided not to go ahead with the construction. My virtues cannot match those of Emperor Wen of the Han Dynasty, and it would be against the principle which states that an emperor should care for his people like a parent.” He then issued a decree to forbid the request of the court officials to build a pavilion for him. (from Jiu Tangshu-Taizong Benji)

In the fifth year of the era of Zhen Guan, the protocol section presented a memorial to the emperor, saying that the crown prince was due for the Adult Ceremony soon, and that the best time was in February of the lunar calendar. They would like the emperor to issue a decree to increase the number of soldiers as guards of honor for the various forms of insignia for the occasion. Emperor Taizong said in reply, “Farming is busy right now, and it [your suggestion] might harm farming work.” He then issued a decree to postpone the ceremony to October.

The crown prince’s teacher, Xiao Yu, presented a memorial to the emperor, suggesting that according to the principle of mutual generation and mutual inhibition in the Yin and Yang theory, February was the best month for the Adult Ceremony. Emperor Taizong said, “I do not rigidly adhere to the Yin and Yang theory in doing things. If one does everything according to the Yin and Yang theory, then he would not care much about reasoning and righteousness. How can we only pursue our own good fortune and ask for blessings from heaven? If one acts according to the righteous way, he will naturally be blessed with good fortune. Besides, one’s fate depends on himself. How can one just rely on Yin and Yang? Farming season is very important and it must not be put at risk.” He then rejected Xiao Yu’s suggestion. (From Zhen Guan Zheng Yao - Farming No. 30)

“Qingdao Courts Begins a Trial While Ms. Gao Mingxia's Lawyers Are Unreasonably Held Up Trying to Enter the Courthouse”