Practitioners in a Pure Land (Photo)

(Clearwisdom.net) In 1998, our group exercise site moved to the East Gate Square. The square is several thousand square meters. At the time, it was the biggest public entertainment place in our small town. 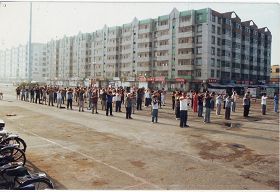 Many people came to the square, especially in the evenings during summer and fall, so it attracted many food booths that sold things like barbecue, fruits, and snacks. By late evening, the square would become very dirty.

The Falun Gong practitioners there followed Master Li's teaching to be good people in all circumstances. Before the morning exercises, we always cleaned the whole square. A fellow practitioner who was very tall led us to clean the square. Another practitioner bought several brooms and brought them to the square before dawn every day. We cleaned the square together.

Once the exercise music started, we stood in an orderly fashion to do the exercises. Every fellow practitioner was very conscientious.

After the exercises, some practitioners went to buy vegetables in the nearby booths. If the sellers gave them too much change, they would return it. Once a practitioner bought some fruits, and the seller gave him 30 yuan in extra change. The practitioner promptly returned the money. Sellers always said that Falun Gong practitioners were very good.

When it snowed in the winter, we would come to the square early and clean the snow with our own tools. Even female practitioners in their sixties worked together with us. After we cleared the snow, we would do the exercises.

Snow and trash removal was supposed to be the janitors' job, but we did it for them before they came. When they arrived, they would stand there and watch us to do the exercises.

Why did we do this? Because we learned Falun Gong! Master taught us to be good people and strive to be even better people. This way, our morality and character would be upgraded.

The square was littered with trash by people who came to be entertained there, but with Falun Gong practitioners' efforts, it returned to being very clean. A common square became a pure land of a group of practitioners.

Sometimes, fellow practitioners from nearby villages came to practice together with us, and it looked magnificent. Once the exercise music started, about 2,000 people stood in an orderly fashion and did the exercises together. The environment was serene, and the music resounded in my ears. The energy field was harmonious and compassionate, and we felt great! It's a pity that we did not take a photo then.

After July 20, 1999, the Chinese Communist Party (CCP) started to persecute Falun Gong and did not allow us to practice in the square anymore. A fellow practitioner said that he once passed by the square and heard one janitor say to another, "The CCP does not allow people to practice Falun Gong, so nobody will clean the square for us anymore."

The square was redecorated several times in recent years, and now it looks modern. But I still miss the square as it was back when practitioners did the exercises there, in a pure land.

“Suffering Mental Collapse After Abuse, Nurse Is Rendered Homeless and Wanders the Streets”