(Clearwisdom.net) I am in my late fifties and was a witness to crimes committed by the Chinese Communist Party (CCP). However, when I heard about Mr. Liu Shehong being arrested, I was deeply shocked.

I met Mr. Liu Shehong around four years ago. At the time, the television in my home needed repair. My friends called maintenance worker Liu Shehong. He looked to be in his early 30s, but was in his 40's and was strong and glowing with health. He was polite and worked quickly. In no time he fixed my television and left in a hurry, explaining that he was meeting a young man of bad repute, whom he wanted to offer a word of kind advice. He appeared to be a very good man. My friend told me that he was not like that a few years back. He was an unpleasant person to deal with and everyone thought that he was beyond help. His story amazed a lot of people.

Preferring to See Him Dead than Evil

My friend talked about Mr. Liu Shehong for more than an hour. It was a story of human triumph, but also one of tragedy.

He said that it was so hopeless that Mr. Liu's elderly mother couldn't deal with him anymore. She tried several times to have him commit suicide by jumping into a river with her.

Mr. Liu was from Daqiao Village, Xian'an District, Xiangning City, Hubei Province. He was born in February, 1967. When he was 16 years old, he quit school and went to Wuhan City to work at a timber processing company.

As it often happens, one's company makes one change. He associated with a group of young people at Baishazhou and Wuchang District and joined a gang, the "Hunan Gangsters." We understand that this gang was quite notorious and well known.

In 1993, at the age of 26 he started taking drugs. Gambling and drugs ruined his health and he also squandered his family's savings. Doing drugs, fighting and swindling people became his life and he served a few prison terms, the longest being four years in a forced labor camp. He was released in June, 2004; however, his work unit fired him. Within a few months he went back to drugs. He had to borrow from friends, who in the end stopped giving him money and avoided him.

In his forties, he had become an outcast in Wuchang, so he returned to his hometown, Daoqiao Village, Xian'an District, Xianning City in December 2006. His lifestyle had ruined his health. His complexion was dark, and he suffered from edema in both of his legs. He had difficulty in walking. His mother cried all the time and his fellow villagers thought that he might die before the 2007 Chinese New Year. He began to borrow money from the villagers, and whenever he got money he would buy drugs with it. His mother was very worried, but couldn't help him. She even tried to have him commit suicide by drowning in a river.

Fate is unpredictable and had something else in store for Mr. Liu. In January 2007, Mr. Liu locked his room and concentrated on reading a book. He kept reading the book for over a month. His mother was very glad since he stayed at home and didn't go out to search for drugs.

After the New Year, he went to Wuchang and continued to read that book. During the Qingming Festival in 2007, his mother went to see him and asked him to offer a tribute to his ancestors. Her son's health had improved and his complexion had changed. He looked a lot healthier.

She assumed that it had to do with the book that he was reading. She wondered what kind of book he was reading that changed him so much. It turned out that it was Falun Gong, a book that teaches people to be good. He also did the exercises and the combination, reading and exercising made him change. 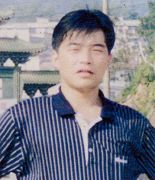 In the past when Mr. Liu was on drugs, he came home perhaps once in one or two years. After he learned Falun Gong, he tried to be good person and live by the principles Truthfulness-Compassion-Forbearance. He came home to celebrate the Chinese New Year every year and visit his mother, as well as his brother and sister-in-law, once every two months.

They noticed great changes in him whenever he came home. They didn't see him take any drugs and he no longer swore or fought with people. He became a hard worker who helped his family and others, and turned completely around.

When people asked him how he had changed, he replied, "It is Falun Dafa that has changed me. Falun Dafa has taught me how to assimilate to the characteristics of the universe: Truthfulness, Compassion and Forbearance. Without Falun Dafa my life would have been a tragedy!"

Mr. Liu Shehong had been on drugs for more than 20 years. Neither imprisonment nor love of his family were able to change him. However, Falun Dafa changed him in just four months.

After hearing Mr. Liu Shehong's story, I was deeply touched. Several years elapsed and I still vividly remembered his story and often told other people about it. Sometimes I thought, Mr. Liu Shehong must be living a happy life with his family right now.

However, this May I learned that Mr. Liu was detained by the Wuhan City 610 Office last December and was illegally put on trial. I thought that he had been doing drugs again, but learned otherwise.

Mr. Liu Shehong was not back on drugs, nor did he break any law. I heard that he only painted on a wall a few slogans with the words "Falun Dafa is good." He simply wanted to express his gratitude to Falun Dafa and let other people know the beauty of Falun Dafa. His motives and actions were good. Why did the Wuhan City 610 Office detain him? The 610 Office is an illegal organization specifically set up by the CCP to persecute Falun Gong. Since July 20, 1999 it has done nothing but persecute innocent people.

I was told that after Mr. Liu was detained on May 4, 2008, the villagers and the Daoqiao Village Committee testified about Mr. Liu's change from a bad to a good person, in the hope that the police would release him.

At the end of their testimony, a representative from the villagers said, "We beg the leaders and staff of the departments concerned to investigate this case carefully, cherish the example of changing from bad to good, which did not come easily, and treat him well."

Mr. Liu Shehong was detained by the Wuhan City 610 Office again on the evening of December 21, 2010 and held at the Hongshan District Detention Center.

Because of Mr. Liu Shehong's experience, all of us, his mother, brother, sister-in-law, villagers as well as all those who know him feel from the bottom of our hearts, "Falun Gong brought people goodness, but the CCP brought people tragedy." 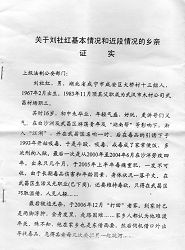 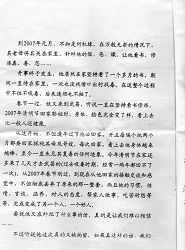 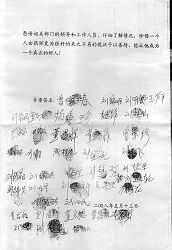 Photo 1: Testimonial about Mr. Liu Shehong's by the villagers 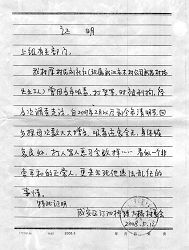