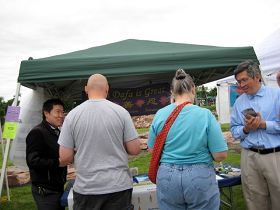 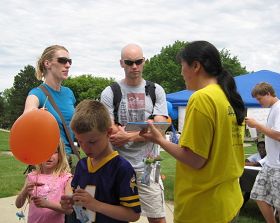 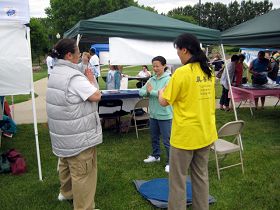 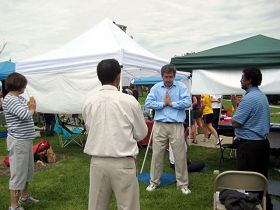 Almost 100 groups from different cultural backgrounds participated in the festival. Falun Gong, an Asian cultivation practice, attracted many visitors. A lot of people learned the exercises. Because so many people were interested in learning, practitioners planned to hold a workshop two weeks later. Those who didn't have time to learn at the festival said that they would go to the workshop.

Even before the festival officially started, people showed up at the practitioners' booth asking for detailed information about Falun Gong. Practitioners shared their experiences and told how they have benefited from the practice. Many people asked for information about the local exercise site and expressed an interest in learning.

Practitioners passed out truth-clarifying materials and paper lotus flowers. They also clarified the truth to a Chinese group at the festival.