Ms. Du Juan Dies after Being Persecuted in Beijing Women's Prison; Officials Refused to Release Her for Medical Treatment (Photo)

(Clearwisdom.net) Mr. Du Juan developed cancer while being persecuted at the Beijing Women's Prison. It quickly advanced into late-stage cancer and she was in critical condition. Her family requested she be released on medical parole many times. Prison authorities refused to release her using various excuses. Ms. Du died in a hospital near the prison on the afternoon of June 14, 2011. She has left behind her mentally retarded son and her nearly 90-year-old father. 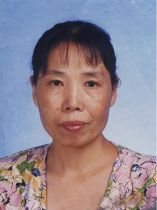 Ms. Du suffered both physically and mentally before she died. She had to rely on taking painkillers daily to relieve the pain. Her lower body started to swell and she was very weak. Her father, a retired army doctor, wept in grief at her situation. Her family requested a medical release, but prison officials refused to release her because she had not given up her practice of Falun Gong. Later, the officials claimed that she hadn't finished half of her prison term and shouldn't get medical parole. Meanwhile, they also claimed that her illness was terminal and attempts at curing her were futile, so they did nothing more than offer painkillers and refused to let other hospitals treat her.

Ms. Du benefited physically and mentally from practicing Falun Gong. However, she was arrested for speaking with people about the practice and was sent to the Beijing Women's Prison in 2004. Liu Yingchun, director of the No. 4 Prison District, is well-known for “transforming” practitioners in Beijing's judiciary system. She used all kinds of methods to torture Ms. Du physically and mentally. She also instigated criminal inmates to monitor and abuse her.

Ms. Du was kept in solitary confinement for a year beginning August 2005. She was also monitored around the clock. The guards deprived her of sleep and forced her to stand or sit for long periods. Her legs and thighs became swollen because of the abuse. Her tail bone oozed a watery pus as a result of kicks from drug-addict inmates, and her whole body was covered with bruises from the beatings. They also verbally abused her and threatened her.

In May 2006, the prison officials started another round of abuse on Ms. Du. They increased the monitoring personnel from two to six. Six people took turns monitoring her. Four people forced her to answer questions that slandered Falun Gong and made her watch videos and read books that slandered the practice. At night, the two people monitoring her wouldn't let her sleep. After August 2006, Ms. Du was forced to do hard labor overtime. The long term physical and mental abuse damaged her health.

Liu Yingchun later sent Ms. Du's homeless son to an orphanage, shot a video of his plight, and claimed that Ms. Du was responsible for her son's condition. Afterward, they released the video to the entire prison district, causing Ms. Du to suffer ridicule, personal attacks, and insults from other prisoners.

On May 6, 2010, she was arrested again and sentenced to three years in prison. She was held at the No. 8 Prison District at the Beijing Women's Prison. Zhang Haina, director of the No. 8 Prison District, is also known for “transforming” practitioners. Ms. Du Juan was diagnosed with cancer and died after being persecuted at the Beijing Women's Prison.

“Over 300 Villagers Petition for Release of Liu Yujing (Photos)”