The Persecution of Mr. Guo Xiaojun by Tilanqiao Prison in Shanghai

(Clearwisdom.net) Practitioner Mr. Guo Xiaojun was diagnosed with retinal artery problems while being illegally detained at the Tilanqiao Prison in Shanghai. His condition has recently become worse. The prison officials notified Mr. Guo that they would take him to the Shanghai First People's Hospital and the Nanhui Prison hospital for an eye exam on May 18, 2011. When Mr. Guo was taken out of the cell on the afternoon of May 18, to his surprise, the police forcibly covered his head and locked him up with heavy handcuffs and fetters, with more than a dozen armed personnel to escort him. Mr. Guo realized that the so-called medical examination was just another form of intimidation and persecution.

Because of his belief in Falun Dafa, Mr. Guo was sentenced to five years in prison in 2000, and was again subjected to four years of imprisonment in 2010. He is currently being detained at the Tilanqiao Prison. 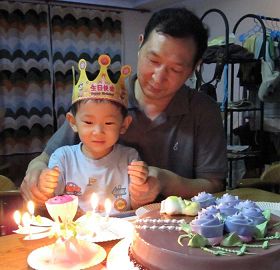 Mr. Guo Xiaojun before being imprisoned and his son

On May 17, 2011, the day before Mr. Guo was taken to the hospital, head guard Liu Wei asked Mr. Guo for his opinion. At that moment, Mr. Guo didn’t say anything. On the following afternoon, however, the police officers came unexpectedly and quickly took Mr. Guo out of the cell. Even more surprisingly, Mr. Guo found that he was surrounded by more than a dozen armed officers, and a head covering was forcibly put over his head in addition to heavy handcuffs and fetters, which was normally the way murderers or prisoners sentenced to death were treated. The police then sent Mr. Guo in a commercial vehicle.

After arriving at the hospital, Mr. Guo found that the entire eye center was blanketed with security. There were more than 20 officers from the hospital security section and the prison.

Mr. Guo realized that the medical examination was just a setup to threaten him, and he refused to take the examination.

On June 2, Mr. Guo disclosed his suffering to his family members when they came to visit him. As soon as the conversation was finished, the family members were led by Liu Wei to a small room. They were met by a woman surnamed Hou, who claimed to be from the Prison Administration Bureau.

Hou and Liu Wei also denied the family’s request to review the examination report, only claiming that Mr. Guo was fine. However, after the examination, Mr. Guo suffered from chest pain for several days in a row and his vision became blurred.

Mr. Guo’s condition has worsened further, and his family has been threatened by the authorities.