(Clearwisdom.net) I am a senior citizen who started practicing Falun Dafa eighteen years ago. Even though it has been eighteen years, it feels like it was only yesterday that I attended Master’s lectures.

Master held the nine-day lectures in the Binzhou City Women’s Volleyball Training Center beginning on July 15, 1994. That was the only seminar that Master held in Hunan Province. Before that, the seminar in Dalian City had to be split into two sessions since so many people signed up. The seminar in Binzhou, however, had to be compressed into a four-day series in which Master only lectured but did not teach the exercises. Also due to the time constraints, Master lectured for two hours on end instead of the customary one and a half hours and another half hour of teaching the exercises.

Although that seminar was shorter than normal, Master taught and gave us everything he did for students in a conventional seminar. He lectured for two hours each day. One of the four days happened to be a Sunday, so he lectured for four hours in the morning and stood for photos with us in the afternoon. Then he lectured for another two hours in the evening. After the last day's lecture Master taught us the fifth exercise himself. In addition, he left the stage and corrected our movements for us. Some fellow practitioners taught us the other four exercises every morning.

Master also asked his assistants to reimburse each of us 20 Yuan because the seminar had been shortened from nine days to four days (originally we had each paid 50 Yuan). Up to that day I had only seen organizations charging people extra money. This was the first time for me to be reimbursed voluntarily by an event organizer, especially doing so for a large number of people. Watching Master’s assistants pay us back one by one deeply moved me; that scene stays alive in my mind, even today.

As far as I know, to teach us, Master had to pay an hourly fee for renting the place. It meant that he paid a two-hour rental fee every day. Let me make a brief calculation here: Master did not reduce the lecture time; hence the location rental fee was not reduced by a large amount. Master was invited by the Binzhou City Qigong Association to conduct the nine-day lectures. Half of the fee that the students paid was paid to the Binzhou City Qigong Association. How much was left after each of us was reimbursed 20 Yuan? Let’s also compare to the other various kinds of Qigong classes. Those mail-in classes charged 50 Yuan per person for only a couple of books and a few letters of instructions. The in-person lectures normally cost 80 Yuan for a two-day seminar. The Communist Party fabricated rumors that Master made a profit from his students, twisting the facts to slander Master.

It was right in the middle of summer, and the room was filled with people. Normally I could not stand the heat but did not feel it when Master gave the lectures. Throughout the whole time I never saw Master drink a single drop of water. Master just kept talking for several hours. Some students with their third eye open could see many of Master’s law bodies and many Falun in the lecture hall; the view was magnificent and splendid!

The second day, a participant wrote a note to Master asking for a Falun. Master said, “If you truly cultivate, you’ll get one.” After that Master added, “As a matter of fact, some of you had already obtained one before I arrived.”

I had experienced something previously that also proved what Master said was true. I stayed in a hostel near the Women’s Volleyball Training Center before the seminar started. Many practitioners from everywhere in the country also stayed there. A thirty-year-old young man stayed in the same room as me. Since the lectures were given in the evenings we often chatted with one another during the day. One day while we were chatting a man suddenly pushed our door open and asked the young man, “Did you just get a Falun?” Smiling, the young man nodded his head. The man was staying next door. Because his third eye was open, he told us that while he was in his room he saw a Falun fly in from outside and land on this young man. Hearing that, many people were amazed because at that moment Master was still on his way from Dalian to Changsha City. 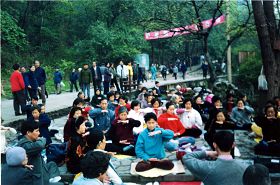 Recalling those days, I feel so grateful that our merciful Master went through so many difficulties to spread the Fa widely.

We Dafa disciples must neither fall short of Master’s expectations, nor sentient beings' hope for us. We should walk well on the path of Fa-rectification, and do the three things well. Master said, “The closer to the end, the more diligent you should be.” By no means can we slack off.