(Clearwisdom.net) The 35th annual Hiroshima Flower Festival, one of the largest celebrations in Japan, was held this year in Hiroshima Peace Memorial Park on May 3. 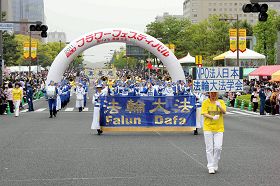 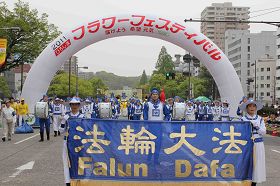 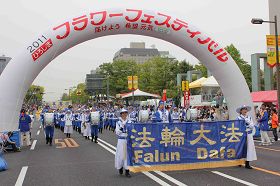 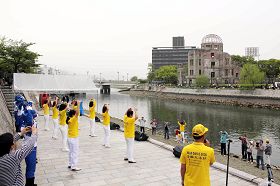 Demonstrating the exercises after the parade

The themes of this year's festival were “Proudly Bloom, Variety of Flowers, Smile and Peace.” The organizers set up dozens of activities and dazzling stages. Every year, more than 1.6 million people come to the festival.

More than seventy groups participated in the festival parade on opening day. It was the tenth year that the Falun Dafa Association has participated in this parade. The powerful Divine Land Marching Band headed the Falun Dafa procession. Beautiful dancers followed the band, with graceful celestial maidens carrying lotus flowers, while handsome young men danced with flower rings in their hands. At the end of the procession practitioners demonstrated the Falun Gong exercises. Lion dancers joyfully played with spectators along the parade route. Young women practitioners distributed lotus flowers to spectators.

The Falun Dafa procession was enthusiastically received. Many people took pictures and video of the parade. Pointing to the Divine Land Marching Band, a spectator said, “They are wonderful!” When a practitioner told him that the band members are all Falun Gong practitioners from all over Japan, he was surprised and said, “Terrific! I'll cheer for them!” Many spectators asked for more information about Falun Dafa with great interest. Quite a few Chinese people said that they came to the festival specifically to see the Falun Gong practitioners.

The Divine Land Marching Band, the Falun Gong exercise demonstration and the lion dance troupe were part of the performance on stage at 5:30 p.m. Several people from the audience said that they would like to learn Falun Gong at a group exercise site.