Mayor Christopher B, Coleman of the City of Saint Paul claimed in his proclamation: “Falun Dafa practitioners’ determination and courage to stand up for Truthfulness-Compassion-Forbearance, while facing severe persecution from the Chinese Communist Party, has shown the world the value of life and preciousness of human dignity.”

Mayor of the City of Minneapolis said in his letter: “I join many elected leaders across the country in opposing the persecution of Falun Dafa practitioners in China.”

Whereas , Falun Dafa is an advanced exercises and meditation practice of mind, body, and spirit based on the principles of Truthfulness, Compassion and Forbearance; and

Whereas, since its public introduction by Mr. Li Hongzhi in 1992, Falun Dafa brought health and peace of mind to over 100 million people on six continents; and

Whereas, Falun Dafa transcends culture and racial boundaries and contributes to the universal dream of peaceful, tolerant, and more compassionate society; and

Whereas, more and more men and women of Minnesota are learning the practice and purifying their hearts, energizing their bodies, and embracing peaceful, virtuous communities; and

Whereas, Falun Dafa emphasizes a holistic approach to health that includes the cultivation of one’s moral character by following the universe’s benevolent characteristic of Truthfulness-Compassion-Forbearance, as well as practicing gentle qigong exercises; and

Whereas, Falun Dafa practitioners’ determination and courage to stand up for Truthfulness-Compassion-Forbearance, while facing severe persecution from the Chinese Communist Party, has shown the world the value of life and preciousness of human dignity;

Now, Therefore, I, Christopher B. Coleman, Mayor of the City of Saint Paul, do hereby proclaim the month of May, from May 1st to May 31st, 2011, to be

in the City of Saint Paul.

In Witness Whereof I have hereunto set my hand and cause the Seal of the City of Saint Paul to be affixed this First Day of May in the Year Two Thousand Eleven. 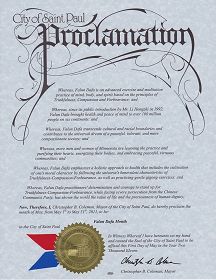 As Mayor of Minneapolis, I am pleased to extend warm greetings on behalf of our citizens to those gathering today for World Falun Dafa Month.

I know many residents of Minneapolis and surrounding areas are enjoying practicing Falun Dafa, an ancient form of exercises and meditation. I hope that the events you have planned for today are a success and that your goals for celebrating and sharing the principles of Falun Dafa are achieved. 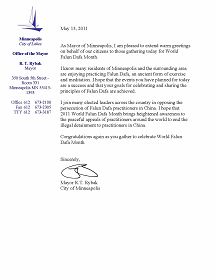