(Clearwisdom.net) On May 21, the 2011 Canada Falun Dafa Cultivation Experience Sharing Conference was held at Convocation Hall, University of Toronto. About 1,500 practitioners from Canada, Chicago, Boston and New York attended the conference. Twenty-two practitioners shared their cultivation experiences on topics varying such as looking inside to make self-improvements, clarifying the truth, and working as one body during Shen Yun promotion to save more sentient beings. 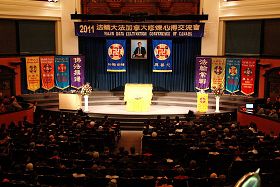 Ottawa practitioner Mr. Li shared his experience in hosting Shen Yun in the past several years. He said: “As soon as Shen Yun Performing Arts started its global tour in 2007, I understood that Shen Yun shows had incomparable effectiveness in clarifying the truth and saving sentient beings. For this reason, Ottawa always gave annual Shen Yun promotion a top priority and consequently had good results in the past.”

After the show ran into some unexpected challenges, as the main coordinator, Li realized that his uncultivated side blocked him from viewing them with full righteous thoughts and unfortunately resulted in losses to Fa-rectification. “Only through intensive Fa study, letting going of self, and assimilating to the universal principles unconditionally, can we truly act with full faith in Master and the Fa, and thus break through the arrangements made by the old forces.”

Mississauga (Ontario, Canada) practitioner Mr. Sturdza originally came from Romania. He shared his experience in helping Romania to host Shen Yun. While there are not many Falun Dafa practitioners in this former communist country, and even fewer in Bucharest, the few available practitioners felt much interference during the Shen Yun promotion period. Some had difficulties at work, some had tribulations at home, etc. All the interference occurred without a clear reason. In such a situation, given the huge workload in Shen Yun promotion, it was very hard to remain calm and compassionate per the Fa's requirements.

He said: “Through Fa study, I realized that the best solution to this was to eliminate all human notions and to do things with a pure heart.” Looking back, he said that the success of Shen Yun in Romania laid in the fact that practitioners maintained righteous thoughts as much as possible.

Ms. Pang came to Toronto in 2002. She said: “Coming to an overseas cultivation environment that was completely different for me, I initially had some reservations and struggled inside. I started as a pupil to do whatever I could to help. Later I participated in Shen Yun promotion and several other projects. I am so glad that I gradually integrated myself to the group and have been doing what a Dafa disciple should do during the Fa-rectification period.”

Regarding how to cultivate well at media workplaces, Ms. Chen from Edmonton shared how she improved in cultivation during her work at the newspaper. She said: “I realized that a team lead needs to be selfless and have a good vision of development in order to form an effective team.” Ms. Li from Toronto said that she started to work as a designer about one year ago and had encountered many opportunities in upgrading xinxing. “No matter where we are and what project we do, it is a cultivation process. As Dafa disciples during the Fa-rectification period, we need to use every moment to save sentient beings. If we can let go of all human notions and ego, we will work well as a group and thus save more people.”

Ms. He from Toronto has been calling people in China to help them quit the Chinese Communist Party (CCP). She said: “While it was very difficult at the beginning, after two and a half months, the percentage of people quitting the CCP increased from 10% to over 30%. More importantly, as soon as I picked up the phone, I was filled with righteous thoughts and compassion. I can feel that I was actually using my wisdom with righteous thoughts to lead the conversations. The persons on the other end of the line also often sensed my confidence and compassion, and thus often chatted with me as if we were friends.”

“Persistence with a pure heart leads to breakthroughs.”

“Celebrating “May 13” – Truth Clarifying Banners and Notices Appear Throughout China”