(Clearwisdom.net) From May 8 to 15, 2011, Falun Gong practitioners from Germany held all kinds of activities in several major cities to celebrate the 12th World Falun Dafa Day and the 60th birthday of Master Li Hongzhi. Practitioners demonstrated the exercises, passed out truth-clarifying materials, set up display boards, and answered questions from the public. Many people learned about Falun Gong and the persecution in China. They signed petitions expressing their support of Falun Gong and some of them also learned the exercises. Many Chinese tourists learned the truth, and some of them quit the Chinese Communist Party (CCP).

On May 14, practitioners held celebrations at Pariser Platz in front of Brandenburger Tor. 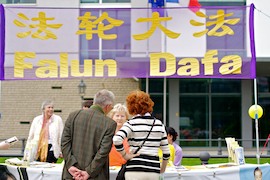 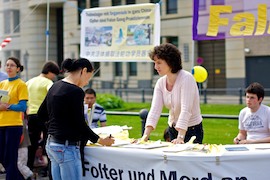 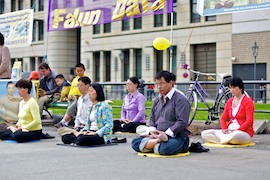 On May 15, practitioners from Frankfurt held group exercises at Eiserner Steg, a famous tourist spot. The peaceful movements and beautiful music attracted many tourists. When one lady learned that the main principle of Falun Gong is Truthfulness-Compassion-Forbearance, she agreed: “Everybody needs it.” She also signed the petition, condemning the persecution in China. Others signed as well, and then asked for more materials for their family and friends. 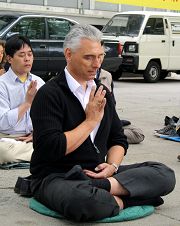 Kasten, a policeman, has practiced Falun Gong for more than 10 years 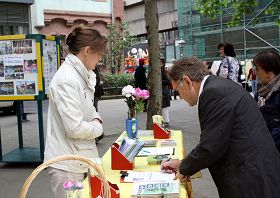 On May 15, practitioners held celebrations in downtown Hannover. The group exercises brought bright color to the city. 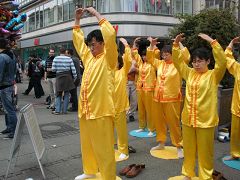 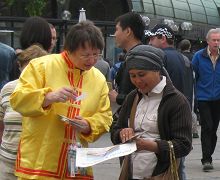 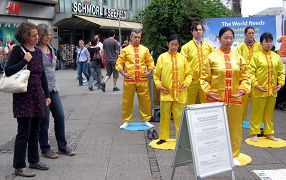 People watch the exercises and read the truth-clarifying display boards 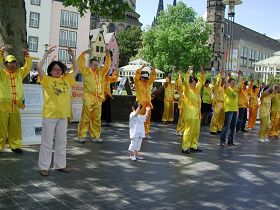 Group exercises at the Rhine river

On May 14, practitioners held celebrations at the train station in Dusseldorf. They demonstrated the exercises and clarified the truth about Falun Gong to the public.

The Eurovision Song Contest was held in Dusseldorf on May 14. Singers from 43 European countries participated in this contest. As a result, the tourist flow at the train station was several fold higher. Many tourists saw the exercise demonstration and accepted truth-clarifying materials. Many of them signed the petition and expressed interest in learning the exercises. 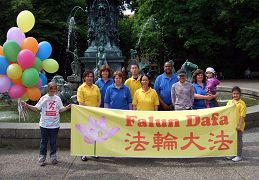 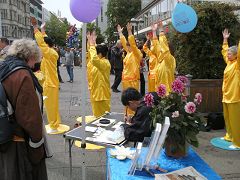 On May 14, practitioners from Stuttgart held celebrations in Ludwigsburg. Many people were attracted to the celebration. A German gentleman picked up a copy of Zhuan Falun from practitioners' booth and read a few pages. Practitioners told him and others what Falun Gong is and how brutal the persecution is. They were shocked. A local citizen took pictures of the truth-clarifying display boards and many people signed the petition, condemning the persecution.

On May 12, practitioners from Munich and the nearby area held celebrations in downtown Munich. People were attracted to the peaceful exercises. Some people learned the exercises during the event, and some asked for detailed information about Falun Gong. A few Chinese tourists quit the CCP with practitioners' help. 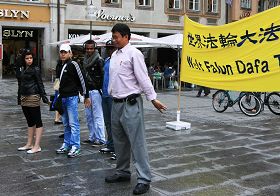 A gentleman learns the exercises 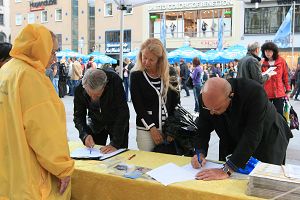 Several local citizens called practitioners after the events, expressing interest in learning the exercises. One lady said on the phone that she is interested in China, but she was shocked by the brutal persecution of Falun Gong, especially the organ harvesting. She said that it must stop. She asked for the contact information of the exercises sites, and said that she and her friends would join the exercises in the future. 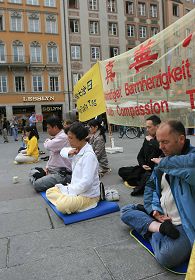