(Clearwisdom.net) On May 13, 2011, Massachusetts State Senator Sonia Chang-Diaz offered an Official Citation to the Falun Dafa Association of New England in recognition of the 12th annual World Falun Dafa Day.

Be it known, that the Massachusetts Senate hereby extends its Congratulations to:

The 12th Annual Anniversary of World Falun Dafa Day; and

Be it further known that the Massachusetts Senate extends best wishes for continued success; that this Citation be duly signed by the President of the Senate and attested to and a copy thereof transmitted by the Clerk of the Senate

By: Teresa Murray
President of the Senate 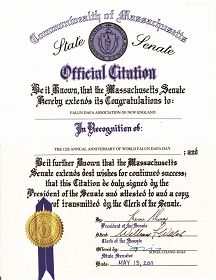