WHEREAS: Mr. Li Hongzhi first brought Falun Dafa out to the public in May 1992 in Changchun, China, and he soon began traveling around China to lecture the public on the practice, which spread very rapidly by word of mouth alone; and

WHEREAS: In 1996, Falun Dafa was introduced to the State of New York, and today, practitioners can be found throughout the state; and

WHEREAS: The practice of Falun Dafa encourages people to be thoughtful of others at all times and to be good people. The practice is guided by the principles of Truthfulness, Compassion and Tolerance; and

WHEREAS: In July of 1999, the number of people practicing Falun Dafa grew so rapidly that that Chinese Communist Party under Jiang Zemin gave orders to destroy the practice of Falun Dafa at all costs, and practitioners have been persecuted for over 13 years; and

WHEREAS: Today, Falun Dafa is practiced and cherished by millions of people in more than 114 countries, and the founder Mr. Li Hongzhi has been nominated four times for the Nobel Peace Prize. Therefore, we come together as a community to celebrate the principles and good works of Falun Dafa by celebrating World Falun Dafa Day.

NOW, THEREFORE, I, Gerald D. Jennings, Mayor of the City of Albany, New York do hereby proclaim Friday, May 13, 2011 as

in the City of Albany, saluting the valuable contributions and principles of Falun Dafa.

IN WITNESS WHEREOF, I have hereunto set my hand and caused the Seal of the City of Albany, New York to be affixed this 12th day of May, 2011. 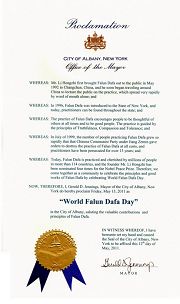