Member of New York Assembly: Good Will Prevail Over Evil 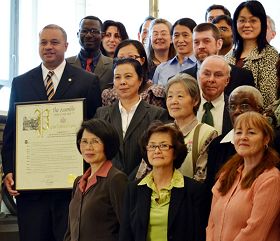 The proclamation commends Falun Gong in uplifting morality, improving health, and leading to enlightenment. It also mentioned that Falun Dafa is spreading around the world, and that although Falun Dafa practitioners are persecuted in China, they keep their belief while facing the danger of arrest.

Mr. Stevenson affirmed that he felt that good will always prevail over evil. He said he was sorry to hear that persecution goes on for those who practice such a peaceful movement, and he expressed hope that the persecution will come to end soon. He hopes that practitioners will be allowed to practice and live a life in peace and respect.

He pointed out that politics should be set aside and human rights and people made an issue. That’s what we should look at. The practitioners should be allowed to continue their practice. 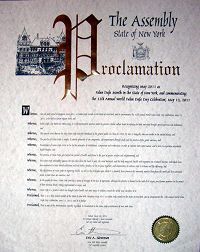 The New York State Senate also passed a resolution and proclaimed May 2011 as Falun Dafa month. One the sponsors of the resolution, Senator Jack Martins, was interviewed and said he appreciated Falun Dafa’s contribution to New York State, “It (Falun Gong) is a wonderful movement. It gives the opportunity to encourage people to reach enlightenment and wisdom through exercise. They also strive to learn and understand those things around us in this world. Those things we all should strive for.”